Skip to content
You are here
Home > Movie Reviews > Review: ‘Spin Me Round’ Spoofs an Italian Family Dining Favorite 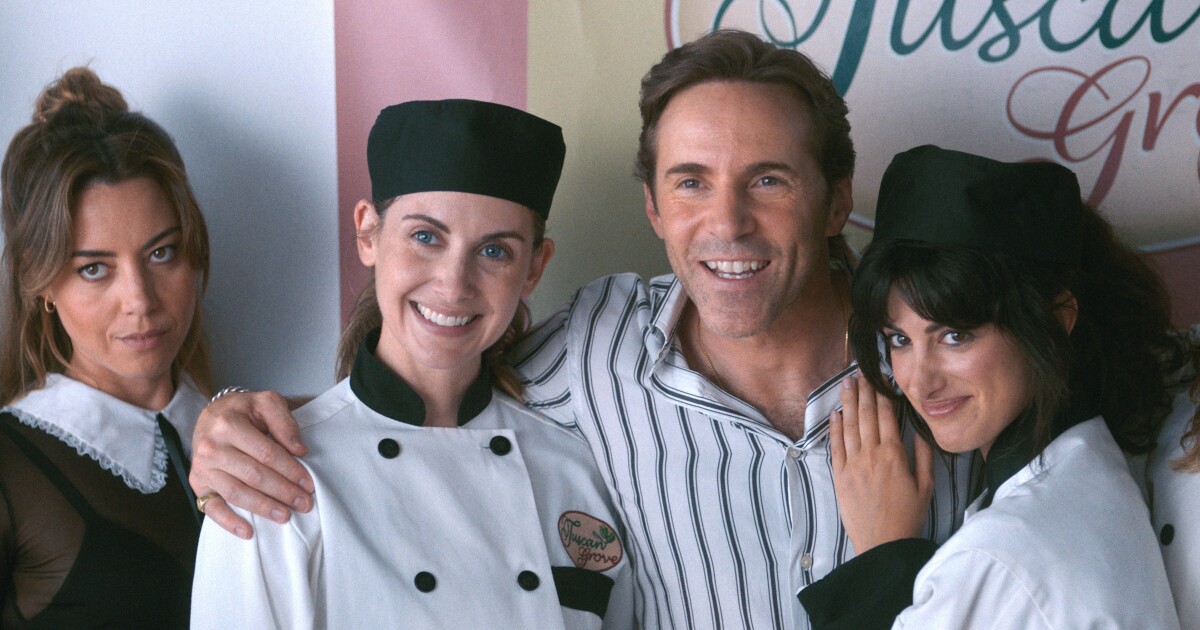 Did you know that Olive Garden has a culinary institute where the Italian-themed restaurant chain pays managers to go to Tuscany? I didn’t until I watched Jeff Baena’s Spin Me Round. In the film’s production notes, he speaks of coming across an article describing a retreat created by an Italian restaurant. He leaves the restaurant unnamed but mentions that the only thing really planned out was the head chef making bolognese – perfectly matching this article from 2011. It seems like a really random inspiration for a movie, but the chaos of it all proves to be pretty entertaining. The script by Baena and Alison Brie (who previously co-wrote Horse Girl) feels like a mix of Eat Pray Love and Eyes Wide Shut, as they play on the darker elements of being trapped on a getaway that doesn’t exactly match the brochure.

Amber (Alison Brie) is a manager at the Tuscan Grove, a successful Italian chain restaurant. She’s been there for nine years and runs a tight ship, so it comes as no surprise when her boss Paul (Lil Rel Howery) tells her to pack her bags for an all-expense paid trip to Italy. Every year, the top managers from franchises are chosen to learn about Italian cuisine and culture surrounded by real Tuscan groves at a fairytale villa. She can’t think of a better place to have a sweeping European romance, and she has eyes for the company’s CEO, Nick Martucci (Alessandro Nivola). Quickly upon her arrival, however, you get the hint that this picture-perfect vacation may not turn out the way she expected. Instead of staying at the villa, they find their rooms at the hotel in the back – definitely no more than three stars; and Amber’s view isn’t of Tuscan groves but of garbage bins. The cooking part of the trip isn’t all that impressive either, and it’s exactly as the previously mentioned article described: they talk about bolognese, spices, cut some fresh produce and that’s it. Instead of teaching these managers how to prepare the food they serve, they just go sightseeing. For most of the film’s first half, it feels like a tourist video.

Then, Aubrey Plaza saves the day with her presence as she always does. Playing Kat, Nick’s assistant, she starts hanging out with Amber. Despite the volatile relationship she has with her boss, Kat helps Amber get closer to Nick. The trip is a real drag, but Kat makes both the film and Amber’s Italian experience more exciting. A hot, European romance ends up being this very weird love triangle. It’s not what Amber expected at all, especially when both Nick and Kat start acting shady. She begins to question their motives and the real intentions behind this retreat, with the story’s genre shifting to a mystery. One character takes the words right out of the audience’s mouth and asks, “What’s happening?!” The script presents you with no clues as to what is really going on, and its winding detours make it an unpredictable viewing. The motive for the retreat is, admittedly, ridiculous, and the ending takes a very outrageous, but entertaining, turn. It’s an adult romance novel taken to the next level.

Spin Me Round is composed of a very dynamic group. In a roundtable introduction of the characters, we get to know Deb (Molly Shannon), Jen (Ayden Mayeri), Susie (Debby Ryan), Dana (Zach Woods), and Fran (Tim Heidecker). The group is a chaotic bunch that makes the film enjoyable as they play off each other to create many funny moments without trying too hard. They all have chemistry and are perfectly in sync with one another. Having previously worked with most of the cast (and being married to Plaza), Baena already has an established trust that would allow him to play with their individual characters and bring out the freedom to let loose in their performances. The natural comedic prowess of the cast is evident. Brie carries the film with an infectious liveliness, but Shannon steals the show (and the laughs) as the clingy and kooky Deb. Another highlight is Plaza, who isn’t in it enough and disappears without any resolution between Kat and Amber. While the actors are amusing to watch, the audience’s attention really depends on how much they care about Amber’s romantic journey.

Apart from being a spoof on Olive Garden’s culinary school, Spin Me Round speaks on the theme of expectation versus reality. One of the flaws with the script, though, is that we don’t get every character’s opinion on the whole experience. The Tuscan Grove means a lot to all of them, but we don’t get the sense of just how this experience changes that. As they surely learn, not everything is like we see on TV, in movies, and in those vacation commercials. They’re too flawless for reality. We project expectations onto things because of how they’re presented to us, and when we finally experience them, we’re let down. It’s a film that says, “If you go to Olive Garden expecting fine, Italian cuisine, you’ll be disappointed.” So, don’t go with expectations.

‘The United States vs. Billie Holiday’ Fails to Capture the Soul of a Legend