Skip to content
You are here
Home > Entertainment > O’Shea Jackson Jr. Chats About Godzilla: King of the Monsters And His Favorite Kaiju 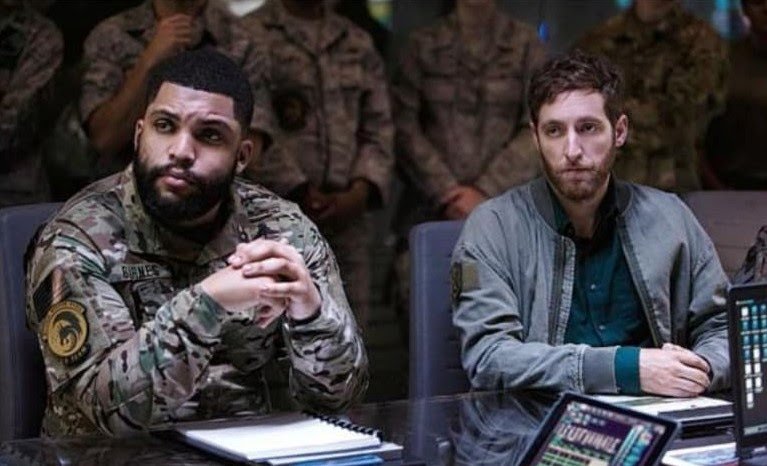 Recently, I had to the chance to chat with O’Shea Jackson Jr. who is starring in the upcoming film Godzilla: King of the Monsters. We chatted it up about his favorite Kaiju enemy of Godzilla and his doomsday preparations. Be sure to check out the interview below!

You just recently gave us best friend goals in The Long Shot and now the fate of the world is on the line in Godzilla: King of the Monsters. So tell us a little bit about your character and what attracted you to this role?

“I play Chief Warrant Officer Barnes who is the senior officer of G-Team, which is a, uh, a branch in military that falls under Monarch. And yeah, we handle everything from, you know, bad guys to bad monsters. And yes, it’s a stressful ass job and it it’s just uh, you know, when you find out that you get to audition for something like Godzilla as an actor, you’re always looking for the slam dunks. You’re looking for the movie that you know are going to work no matter what. And I knew Godzilla would work. Like you’re dying to be a part of that. And I’ve been a Godzilla fan since I was a kid. So, you know, I just looked at this as, you know, God throwing your boy a bone. It worked out.” (laughs)

Many people may not know that before you did Straight Outta Compton, you were actually studying screenwriting at USC. Now that you’ve been exposed to this entertainment world through the lens of an actor, how has that changed your perspective as a screenwriter?

“Screenwriting really helped me as far as acting too, because it gives you, as a screenwriter, our job is to twist the story along. You don’t ever want to give too many details or have something not fit to push your story along. So in acting when, you know, say it calls for some improv or you do something on the fly, you’re able to work within the world of your character while at the same time remembering that the goal is to always push the story along. So, you know, as far as that is, you know, it’s helped. And for screenwriting, I know what an actor needs. You know, I know what a juicy scene is now. You know, I know what actors drool at, you know, what they love to have. So, you know, once you figure out the balance in, in making both, pushing the story and keeping your, your artists happy, you know, that’s when you can make something really nice.”

So do you have like a passion project? What is your dream screenplay that you would love to write or maybe you’re already working on something?

“Uh, I want to be the guy who gets the video game movies, right. I want to be a big name when it comes to adapting movies into video games. I want that to kind of be one of my callings. I want, I want to be looked at as if you want it to work, you should probably ask Shea. You know, it’s uh, it’s – I feel like it’s an untapped market. I mean it’s been tapped, but”

No one’s really gotten it right. Really recently Detective Pikachu. So you like touched my soul with that because yes, please someone save these video game adaptations. We’re on a roll with Detective Pikachu that just came out. So I’m waiting. Like, do you have a video game in mind? Like what’s your favorite video game?

“Uh, I mean the ultimate game to be turned into movies. Obviously Grand Theft Auto. I mean that would be the easiest. You could just do that easily. Another one, I can’t really say without having a meeting first. You know, I know a bunch of people listen to your ideas and you might just go in like, oh yeah, we already thought of that.”

Hey protect your ideas. I understand.

“Thank you. I, when I finally get it, you’ll be the first interview me.”

So I know that you are a huge Godzilla fan, so I wanted to ask you, if you had to go head to head with Godzilla as one of the monsters, like who, which one would you choose to be in? Why?

“Uh, I’ll probably choose a monster by the name of Gigan. Gigan was the one monster who I was like, Yo Godzilla should have loss that. You know, it was just mad bloody. And like as a kid, I remember thinking God damn, it’s a wrap. And of course he prevailed because Godzilla’s the hero. But you know, if you ask a hardcore Godzilla fan Gigan, they know Gigan is a problem.”

Let’s say that you were in a city and Godzilla is on the loose and you had to get out of dodge. What would you pack like in your survival bag? Like what will be your survival items that you will use and why?

“Well, I’m a bit of a doomsday prepping type of guy. So like I literally have like, I got a pack of like 10,000 seeds in my house of different vegetables and stuff. I got like four of those. I got like packs for, for like 40,000 worth of seeds. 40,000 seeds of food and a, I have something called a “life straw” which turns any water source into drinkable water. Yeah. I have a something called a us a supreme bracelet that has a fishing hook, a water purifier a compass, a portage, like a fire starter. You have all that on it. And uh, probably my PlayStation. I keep my PlayStation with me everywhere I go.”

But what if there’s no power?

“We’ll find that sh** eventually, and I’ll be the only one playing it.”

So I want to know as a fan of Godzilla, you know, I feel as though I’ve been watching the movies. You know, they kind of revamped this universe. I truly feel like they never put any respect on Godzilla’s name. They try to paint Godzilla to be a monster. When really he’s just out here trying to mind his business and help us out along his way. So, um, I wonder, do you have any feelings towards that? Um, can you tell my audience like do they do right by Godzilla in this film?

“You know, as a kid I had a, I had a question earlier today, somebody asked me why the Godzilla always destroys cities. And my response was because the cities are always in his way, it’s not about him destroying the buildings. This just happens to be where the fight is. If they fought around the mountain, there would be no cities crushed. But that’s just how it is. And  Godzilla only comes out of the water when another monsters getting not aligned, you know, Godzilla is everybody’s dad. When somebody comes into his yard tripping, he makes sure he checks them and when he’s done, he always goes back into the water. If Godzilla was after us, he would have killed years ago. It has nothing to do with us. We can’t do nothing to him. Godzilla, as far as, King of the Monsters go, this is the first U.S., American Godzilla that finally decided to pay homage to the original, you know, score the original monster, the original content. And you can’t push a legacy forward. We will never be a part of this family – of the Toho kingdom – if we don’t respect where we came from. You don’t know where you’re going if you don’t know where you came from. And so we have, we have a bunch of, you know, original scores that we remastered and put in and shout out to, you know, some legendary monsters and it’s something for the new fans and the old.”

Your previous costars Corey Hawkins and Jason Mitchell were in this same universe with Kong: Skull Island. So I know you can’t give too many spoilers, but you think we’ll ever see like a Godzilla versus Kong. Kind of like reunite the kind of universe that they built so far. Anything like that you can tell us about?

Listen to the full Interview:

Godzilla: King of the Monsters hits theaters on Friday, May 31st!

Aisha Hinds Talks Godzilla: King of the Monsters And The Portrayal of Black Women In Film

2 thoughts on “O’Shea Jackson Jr. Chats About Godzilla: King of the Monsters And His Favorite Kaiju”