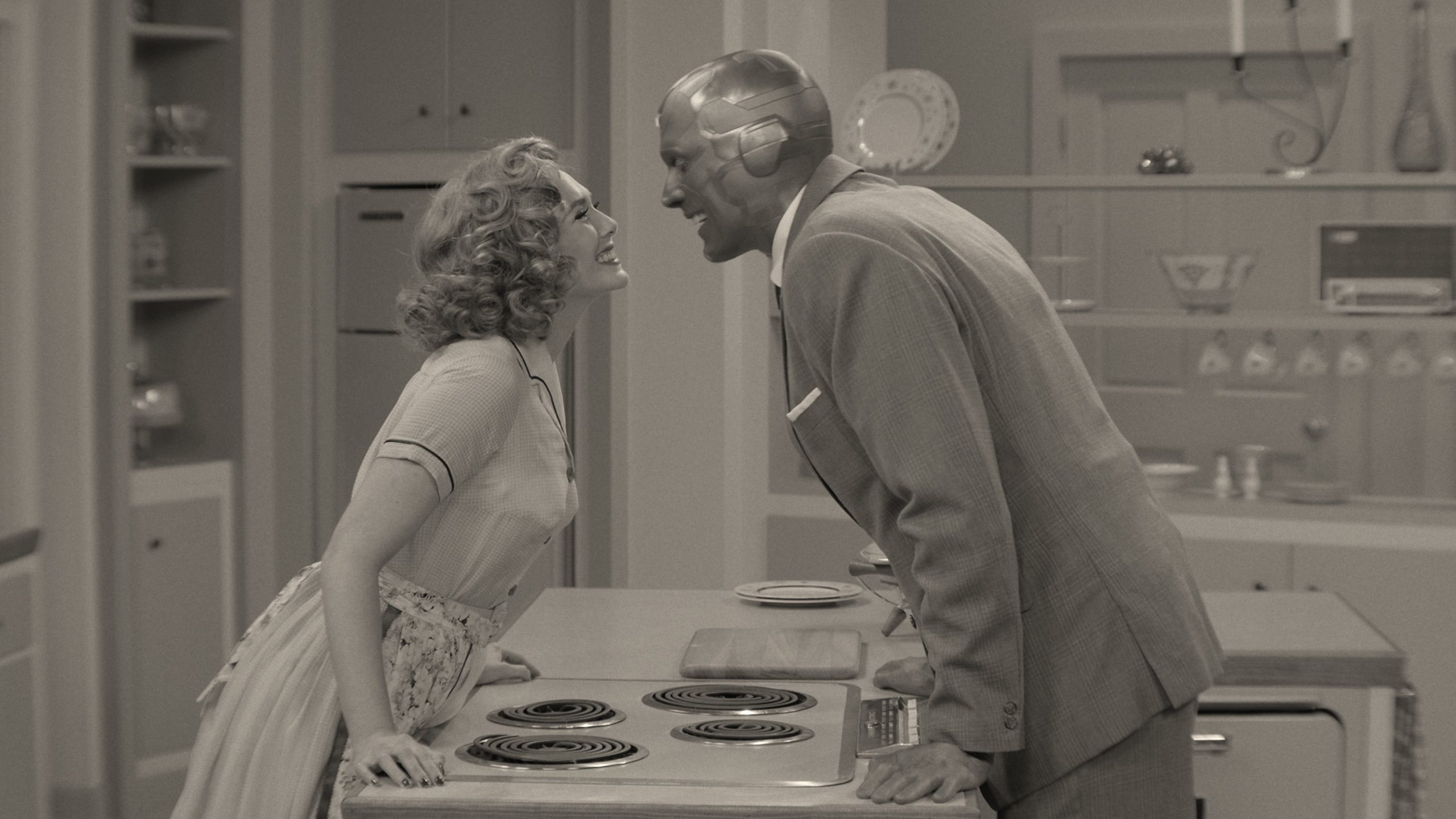 Wandavision, which is Marvel Studio’s first TV series to premiere on Disney+ this Friday, bringing Wanda Maximoff and Vision who are living their ideal suburban lives-begin to suspect that everything is not as It seems to our television screens. I had a chance to attend a press conference with the stars of Wandavision Elizabeth Olsen (Avengers:Endgame) Paul Bettany (Avengers:Infinity War), Kathryn Hahn (Central Park), Teyonah Parris (If Beale Street Could Talk), director Matt Shakman (Game of Thrones), creator and co-writer Jac Schaeffer (Black Widow), and the President of Marvel Studios Kevin Feige moderated by the iconic TV actor, Jaleel White.  The cast discussed what it was like filming bringing a new chapter of Wanda and Vision’s relationship to television and how this story fits into the overall vision for the MCU.

Wandavision does such a fantastic job of blending the nostalgia of TV sitcoms into the mystery of what’s happening the MCU. When asked how Matt Shakman how he transitioned the cast to acting for television he responded “Well we wanted to be as authentic as possible. That was one of the biggest goals, and so production design, cinematography, costuming, everything was about going on this deep dive and with the actors we all wanted to do the same thing, so we watched just a ton of old television episodes, talked about how comedy changes, you know, because it really does. The approach to comedy in the 50s, 60s, 70s is really different. And as Lizzie said, the doing it in front of a live studio audience, which is this weird quasi theater-TV, uh, thing is real-it really adds to It.”

To add to the authenticity of filming a TV sitcom the cast had the amazing opportunity to film the first episode of Wandavision in front of a live audience. Elizabeth Olsen spoke about her experience on filming the first episode, “Um, oh, God. It was the first thing we shot. It was so nerve wracking and, um, there was a lot of adrenaline. It really messed with my brain, the idea
of not playing to an audience but feeding off an audience and having a camera and I was really grateful when we
added the forth wall for our second episode.”

Over the years there have been many variations of Vision in the MCU but when asked how Vision stays true to the core character in Wandavision Paul Bettany replied, “Yeah, I was worried about that initially. I was like, “Wow, this feels so different,” as I read the  script and how do I keep him the same? And then I realized he’s always been becoming something else, you know. He’s  Jarvis, he’s part Ultron, he’s part Tony Stark, and he’s  omnipotent but he’s also this sort of naive ingenue. .” “I think what Vision is is just decent and  honorable and-and exists for Wanda, and then you’re safe.

Creating a TV series based on a complex relationship between two super-powered beings can be challenging. When asked about why Wanda and Vision’s relationship was so important to create a TV series about creator and co-writer Jac Shaeffer said, “Yeah, absolutely. I mean, I think that Wanda and  Vision are really as a couple a fan favorite because their their love story has been so very tragic but also really  kind of warm and intimate, and we’ve seen them in these really beautiful kind of stolen moments in the MCU. It’s  actually been a small amount of screen time but very  powerful and very, um, soulful, and-but what we have with  WandaVision which is really I think a treat for all is  we’re sort of opening up the stage and the space for them  and they’re in this like domestic sphere.

Shaeffer also gave a sneak peek on what to expect from the couple during the series, “We get to see them doing dishes and  in the kitchen and being cute and just all the  sort of like homebody stuff that you would never get to see a superhero participate in. So we really go from  these enormous sort of dramatic moments, and kind of  frat moments in the MCU and then in WandaVision, it’s a lot of cute-cute until it’s not.”

While the show focuses on the continuation of Wanda and Vision’s story, it also introduces us to two new characters Monica (Teyonah Parris) and Agnes (Kathryn Hahn) who bring a level of mystery as to what reality the show takes place in. When asked what to expect from their characters being added to a twisted reality Teyonah Parris said, “They have definitely been through some things and seen some things and it’s actually really cool that you bring  that up because we actually do get to learn particularly  what those things are that Monica has seen and gone through and how they have shaped her life. So I don’t want to give  too much away because we will actually touch a lot on that through the course of the show.”

Kathryn Hahn also added, “I would say the same thing  and I would also say, like in a-in all those classic sitcoms, like you know, you never-you-you always-there’s  always that person that busts through the doors and-and  sits on the couch but-and you never like-it’s like their  personal life, you never get to know anything about them.  They’re there so I think that we will-I-I think in that  classic way, it’s-it’s-that’s, um, I was able to walk into  it as-as Agnes just like with all those beautiful, um,  tropes set up behind me to just b-to just build on.”

Wandavision upholds the nostalgia of classic TV sitcoms while also staying to the MCU at heart. We will have to wait until January 15th to watch the mystery unfold on Disney+ where new episodes will be available to watch each Friday.