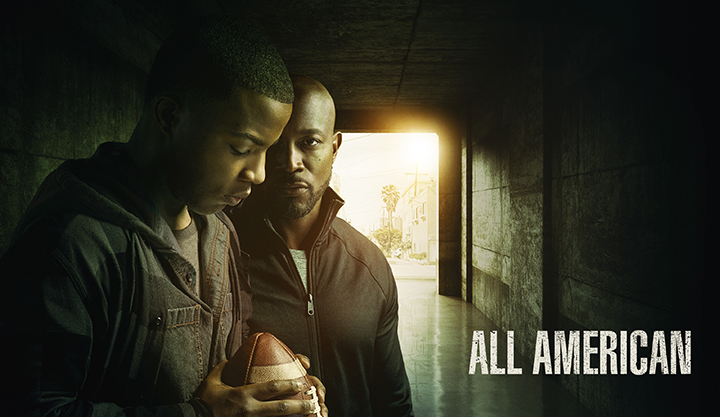 A new series is coming to the CW, and this time it is centered around football. All American is inspired by the life of NFL linebacker Spencer Paysinger. From the looks of the trailer, this series looks interesting as it centers around a young football star who must navigate between two different worlds as he tries to make a better life for him. Be sure to watch the new trailer below!

Spencer James is a rising high school football player and A student at South Crenshaw High. Compton is the place he calls home. But when Beverly High School’s football coach Billy Baker recruits him to join his team in Beverly Hills, Spencer’s mother, Grace, and his best friend, Coop, convince Spencer it’s an opportunity he has to seize. Now Spencer must navigate two worlds, the south side neighborhood that he knows and the affluent Beverly Hills world that has offered him an opportunity for something bigger. When Spencer is forced to move in with Billy and his family to protect his transfer permit to Beverly, Billy’s son, Jordan (the team’s starting quarterback), is less than thrilled to be sharing his father’s attention – or the team spotlight – with Spencer. While Spencer struggles to find his footing, he makes an unlikely friend in Jordan’s sister, Olivia, who is dealing with her own demons. He also quickly develops a crush on his classmate, Layla, something her boyfriend, Asher, quickly realizes – and so, he sets out to drive Spencer off the football team and out of Beverly Hills for good.
Inspired by the life of NFL player Spencer Paysinger.  All American stars Daniel Ezra, Taye Diggs, Samantha Logan, Bre-Z, Greta Onieogou, Monet Mazur, Michael Evans Behling, Cody Christian, and Karimah Westbrook. All American is from Warner Bros. Television and CBS Television Studios in association with Berlanti Productions, with executive producers April Blair (“Reign”), Greg Berlanti (“The Flash,” “Riverdale”), Sarah Schechter (“The Flash,” “Riverdale”) and Rob Hardy (“Power”).

All American will air Wednesdays at 9 PM EST on the CW. Make sure you catch the series premiere Wednesday, October 10, 2018. Be sure to share your thoughts on the trailer in the comment section below!

New Glass Trailer May Have You On The Villains Side