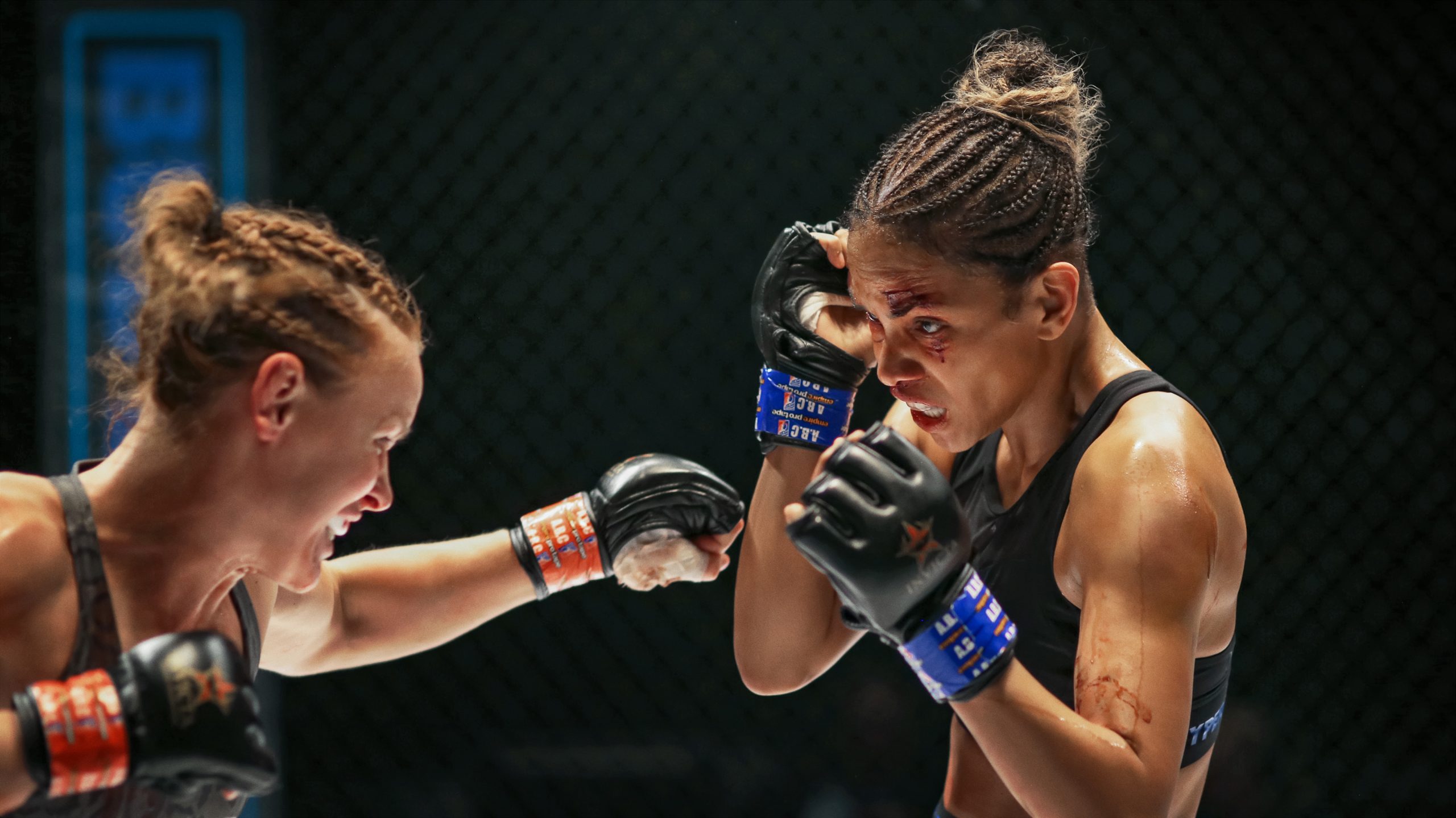 Halle Berry’s directorial debut, Bruised, opens with the question: “Should women be in the cage?”. This is posed right before Berry’s Jackie Justice is seen jumping out of the cage during an MMA fight like, as is later described, a “scared rabbit.” Throughout the film, she’s reminded of the failure she is for being unable to meet certain expectations or take the pressure. Women in sports like Simone Biles and Naomi Osaka also knew to step away when the pressures became too much, and the film is first and foremost a commentary on how women in sport are scrutinized, but also how they are treated as they age. Despite making up 40% of all participants in sports, women only receive 4% of coverage and the same amount as they did in the 1980s. It’s hard to make a name for yourself in a profession that doesn’t seem to want you in it. In Bruised, characters comment that Berry’s character “used to be” Jackie Justice. She still is the same prized UFC fighter, but she just has to prove it – to the public and to herself. Despite whether or not they hit familiar beats, films about down and out characters climbing out of the gutter should be uplifting, but this story by Michelle Rosenfarb about a washed-up fighter’s comeback finds little emotional payoff.

We are introduced to Jackie taking a beating. The camera shifts to the third person. It’s disorienting and blurry as it captures what many thought was the end of her career. Then, the film jumps six years to a scene of her scrubbing toilets as the housekeeper of a rich family. She harbors the same rage as she was known for in the ring, as she throws her employer’s son’s phone against the wall and stomps on it like her fists to the bodies of her opponents. Her abusive manager boyfriend Desi (Adan Canto) pressures her into fighting again, but she tries to convince him (and herself) that she’s happy, despite her failures driving her to drink. As rough as it was in the octagon, it’s more so since she jumped out.

Her apprehension towards putting on the gloves changes when Desi brings her to an unsanctioned fight to scout a new prospect. Once there, she’s recognized and enticed to show them that Jackie Justice’s still got it. “You want to fight or you want to run,” one spectator asks. But she has plenty of fight left, and when she finally throws a punch, it’s satisfying. She’s approached by Immaculate (Shamier Anderson) who runs Invicta FC, the biggest female league in the game. He gives her an offer: fight in his league and he’ll get her back in the UFC. For a brief moment, her life seems to be turning around. She trains at Immaculate’s gym with Bobbi (a very zen Sheila Atim), who pushes her to her limits to get to a point where she’s finally ready to fight again. Then, Jackie’s mom (Adriane Lenox) shows up at her home, leaving a little boy on her doorstep. We learn Jackie had a son that she left with his father. But now his father is dead and Manny (Danny Boyd Jr.) has nowhere else to go. Meeting his mom for the first time with a black eye doesn’t make the best of impressions, and their relationship isn’t an easy one to build when the trauma of his father’s death causes Manny to go mute. However, his arrival is a wake-up call for Jackie to start cleaning up her messes; a wake-up call that she can no longer live her life wallowing in self-pity. Now she has someone to protect, and this helps motivate her to get back in the ring.

The final training scenes, as well as her comeback in the octagon, are thrilling. Facing a fearsome opponent in Lady Killer (Valentina Shevchenko), this fight is brutal and Berry is throwing all her own punches. She displays so much physicality in these scenes as she hooks, jabs, and takes down her opponent. Bloodied and beaten, the film reaches its climax and Jackie is now walking with a different stride. Despite her reaching her goal, it came after acts that carried lingering hopelessness, resulting in a lack of celebration by the end. Jackie is constantly abused and talked down to by everyone around her, and that creates a very bleak and depressing redemption story that results in very little emotional payoff.

This has a lot to do with two things. One, how the film was shot. While tight, fast-moving camerawork makes sense in fight scenes to see every action and to get a sense of the emotions the fighters are going through, this doesn’t work for the rest of the film. These closeups and an unsteady hand provide no breathing room to take in the scenes properly, and they’re also almost all dimly lit. Much of these issues could have been remedied with more attentive editing. Second, how her relationships are written. Jackie’s relationship with Manny and how it changes is definitely a highlight, but they spend way too much time apart and get very few moments of peace together. The relationship with her mom is complicated, and their issues are laid on the table in a messy, indigestible way. And, of course, her boyfriend is simply unbearable in every scene. The only light in the film is Bobbi who brings out the best in Jackie and helps her simply breathe again. But this is all ruined when their relationship turns queerbait-y.

There’s no doubt Berry is a talented actress. She does overact in one scene here, but she’s one of the aspects of Bruised that warrants very few criticisms. However, it’s hard to tell how adept she is as a director with this effort. As a Black woman in Hollywood, Berry had to fight for many things, like being able to sit in the director’s chair, but there are too many things about Bruised that knock her down.

Me Before You Movie Review