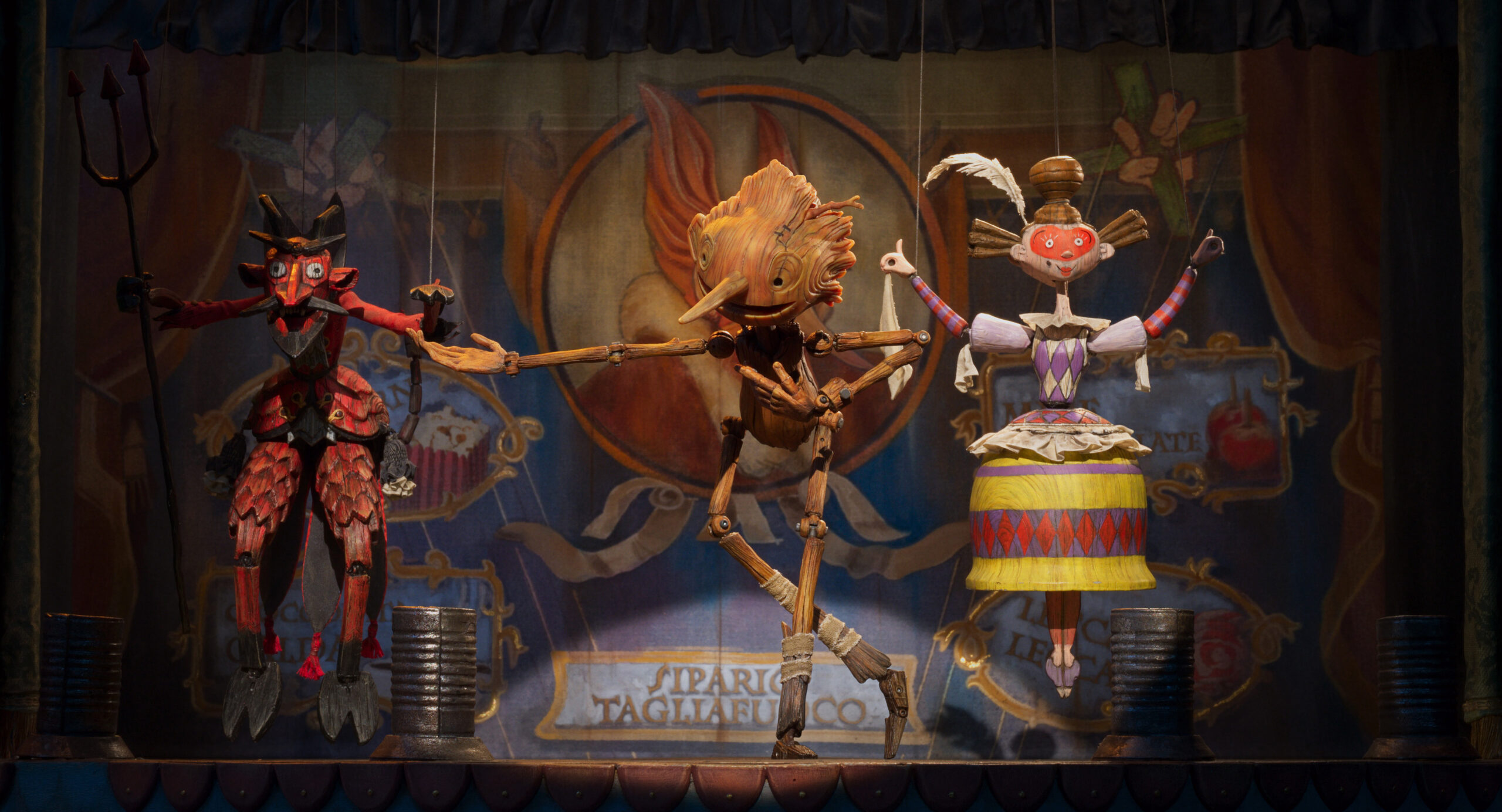 From Pinocchio’s very first frame, you’re hit by its stunning, intricate craftsmanship with almost tangible quality. The blend of practical and visual effects is so seamless that it’s hard to know what was handcrafted and what wasn’t. The first frame also carries symbolism. Guillermo del Toro and co-director Mark Gustafson chose a pine cone hanging on a branch as their first shot because it represents the many themes they’ll explore, like resurrection and enlightenment. In del Toro’s retelling, co-written with Patrick McHale, Pinocchio (voiced by Gregory Mann) is also carved from a pine tree. This wooden puppet is brought to life with a wood that symbolizes immortality. The themes of immortality and mortality are touched on throughout, especially in the context of what being a “real boy” actually means. As del Toro and McHale set their interpretation of Carlo Collodi’s classic novel in Mussolini’s Italy, it’s not surprising that the director wants to lean into darker thematic material as much as possible, creating a story that’s more rooted in reality than a dreamlike Disney fantasy. But Sebastian J. Cricket (voiced by Ewan McGregor) explains that this story above all is about imperfect fathers, imperfect sons, love, and loss. It’s a story that moves you in the universal relevance of what it means to be human. It’s a kids’ movie for adults that’s immensely profound. Both with humor and heart, it stirs an emotional reaction in its audience and surprises by subverting expectations.

Accompanied by Alexandre Desplat’s gentle score, we meet Geppetto (David Bradley) mourning the loss of his son, Carlo (also voiced by Mann). The film’s opening scene set at Carlo’s graveside can feel jarring or sudden, but as an audience who’s had to see many sudden deaths in our children’s movies, it acts as a cushion to the blow for kids. For much of Pinocchio, the filmmakers keep a balance between what would favor an adult or child audience. Death is a part of life, and a lesson you can’t learn too young. One of the flaws of the Disney adaptations is how they gloss over death completely. In the animated film, you don’t know that Geppetto lost a son. In the newly released live-action film, you finally do learn about Geppetto’s loss but it isn’t felt as deeply as it is here.

Bradley’s voicework as the woodcarver envelops you in anguish and anger. The character’s loneliness and pain are emotionally resonant and the details of his animation – a tear, a quivering lip – make him feel alive. The emotion he stirs in us is real, like the almost tangibility of everything on the screen. Overcome with grief, he creates Pinocchio in drunkenness. Under the flash of lighting and crack of thunder, the scene’s visuals and shadowplay make you think of Frankenstein creating his monster. This link isn’t surprising with the film’s already gothic tone, but also del Toro’s quoted fascination with the similarities of both stories. As he told Vanity Fair, both stories are about children thrown into the world and expected to “figure out what’s good, what’s bad, the ethics, the morals, love, life, and essentials, on their own.”

Del Toro’s Pinocchio isn’t adorable in the traditional sense. Like every character in the film, he’s handcrafted and rough around the edges. But even more so without a coat of paint and nails sticking out of him. Mann infectiously brings out the character’s sunny disposition, excitability, and eagerness for experiences, and also the feelings of hurt and confusion when not accepted by those around him. The character isn’t dressed up to look like a real boy, but he sure has the curiosity of one, resulting in a fun toon sung by Mann titled “Everything Is New to Me”. There are quite a few new songs here, all unlike their original counterparts. The story itself also takes familiar story beats, but with many differences to make the film feel like a new experience.

Ewan McGregor as Sebastian J. Cricket is funny and charismatic. His narration captivates, and his role is a bit different this time around. He doesn’t act as Pinocchio’s conscience but is there to guide him in exchange for a wish. Sebastian isn’t told to teach the wooden boy how to be brave, truthful, and unselfish, but the cricket learns how to be all those things himself. The Wood Sprite (Tilda Swinton) replaces the Blue Fairy in bringing Pinocchio to life and giving Sebastian his task – del Toro’s love of monsters is evident but toned down for a young audience. A glowing blue figure with eyes covering her wings makes an adult audience recall Pan’s Labyrinth. Swinton’s dual role as the Wood Sprite and her sphinx-Esque sister Death bring added interplay to the prominent immortality vs. mortality motif. The eccentric and menacing Count Volpe (Christoph Waltz) replaces the fox, Honest John, with his cat partner Gideon now a monkey named Spazzatura (voiced iconically by Cate Blanchett). The ambitious puppet master is given winged-like hair to resemble the fox ears of the old. It’s an excellent, exaggerated touch that also accentuates the fact that he’s trying to regain his aristocratic status. As Volpe, Waltz gives one of the best performances of his career and also the best musically in the film, as he laments Volpe’s misfortune with the song, “We Were a King Once”. Ron Perlman and Finn Wolfhard provide the voicework for another father-son dynamic. The hard army man Podesta, who controls the area, seems to love the fatherland more than his son, Candlewick, who he sees as a disappointment. In Geppetto’s difficulty being a father again, he comes to learn how to do what Podesta couldn’t: Love and accept his son as he is.

Unconditional love is at the core of the film. Love is one of the strongest emotions we feel as human beings, and Pinocchio is guided on a journey of learning how to be human. Del Toro and co explore humanity at its worst with its World War II setting, and showing nationalism through the character of Podesta carries a contemporary resonance. However, the Christian allegories and scenes reflecting religious persecution become a bit too much in a film that already explores so many substantial themes. The filmmakers balance dark with light by showing humanity at its most beautiful through Pinocchio’s selflessness, determination, and the connections he forms around him. This Pinocchio connects across generations. With a balance between an animated film for adults and children, it will entertain both while introducing a complexity that will have kids asking questions. While everything from its character design, sets, and visual effects are magical, what’s more so is how it will bring parents and children together in some important conversation.

Del Toro is a master storyteller who completely changes how we’ve ever perceived this story. By tackling very deep ideas about what makes us human, whether or not Pinocchio is a real boy is no longer relevant.