Skip to content
You are here
Home > Movie Reviews > ‘Babylon’ Is a Boisterous, Raw Take on Roaring ’20s Hollywood 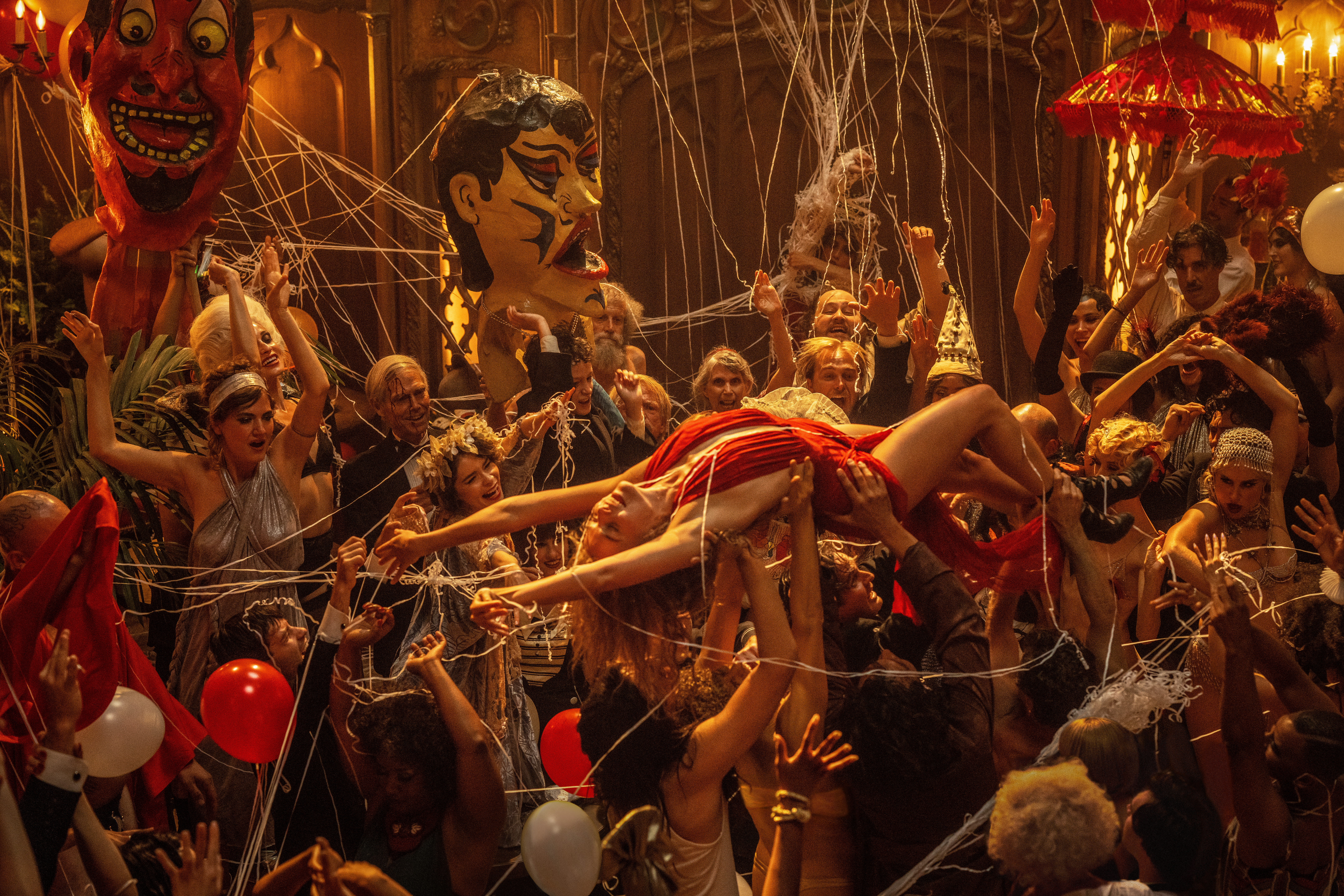 Babylon, the ancient city and biblical image of societal iniquity and hedonism, is the perfect title and description for a film about Hollywood in the Roaring ’20s. This decade brought economic prosperity, excess and joie de vivre for many. Men and women alike gave in to their sinful desires for booze, sex, and drugs, and their temptations for fortune and fame. It was an age of jazz and sexual liberation, which proves an entertaining film setting. Writer-director Damien Chazelle’s epic, Babylon, is as outrageous, hilarious, and insane as a film about Old Hollywood can get. The film industry was at its peak, but the debauchery of those who lived in it had consequences. Chazelle charts the rise and fall of several characters, both shaped and destroyed by Hollywood. It’s an uncensored look at movie stardom before and after the return of conservative sensibilities and the transition from silent film to talkies.

Only in Hollywood would Mexican immigrant, Manny (Diego Calva), find himself having to deliver an elephant to a party thrown at a Hearst-Esque mansion. The process proves to result in an almost equal amount of excretion and ridiculousness as the party itself presents. The extravagant madness and hilarity of the film’s first two halves never cease, thanks in part to the characters we meet. The first party scene, heavily shown in the film’s trailer, is one of the film’s most memorable. The chaotic energy here, matching the beats of Justin Hurwitz’s bombastic score, is something to behold, and using a Black trumpet player named Sidney (Jovan Adepo) as the cinematic source of the film’s music highlights the community’s massive cultural impact on the decade.

Hollywood is shown mainly through the eyes of two characters, Manny and Nellie LaRoy (Margot Robbie), highlighting the different perspectives and experiences of both. Manny has come to the City of Angels to be a part of something big, something important, and to experience the magic of a movie set. He finds friendship with Nellie who has come for the same thing. She already sees herself as a star despite never acting before and, unlike Manny, easily fits into an environment with the Garbos of the world. Also making their presence known at the party is Jack Conrad (Brad Pitt). Despite being on the heels of a divorce, Jack is ready to let loose. And as the most sought-after, high-grossing leading man, he has nothing to lose. Coming out for a song in top hat and coattails is Lady Fay Zhu (Li Jun Li). She owns the party, as Anna May Wong once did, but this time with Dietrich swagger as she recreates the famous same-sex kiss from Morocco (1930).

While Nellie’s feverish dancing symbolizes the freedom of the flapper, Lady Fay’s queerness symbolizes the blooming visibility of queer people and the openness about sex and sexuality that was taking shape during the 1920s. All of that would be lost in the following decade. The film industry’s production code and the Church’s heavy influence on what should and shouldn’t be shown on film see the characters and environment that Chazelle first introduces completely change in an almost unrecognizable way.

The energy of later parties grows stale in its inability to capture the 1920s fervor. They are so toned down that fighting a rattlesnake is an example of a desperate attempt to bring back any sense of past vitality. The magic of the movie set evaporates, too. Like the party that kicks off Babylon, another grand highlight is the period-set film that Jack brings Manny to. The “anything goes” slogan of 1920s youth also applied to filmmaking. Filming a battle scene with a live orchestra playing adjacently, violence ensues resulting in the carnage of a real war. It’s fascinating to observe the nonchalant attitude to what happens on set – bigger is better even if dozens of cameras get wrecked. But when the talkies came along and the Hays Code was enforced, filmmaking became both more restricted and complicated. Chazelle captures an unbearable work environment where, ironically, silence is paramount in order to capture the perfect sound on set. Everyone is on edge and temperatures run hot as P.J. Byrne, playing an assistant director, loses his shit in frustration.

That frustration permeates the lives of the film’s main characters as the end of the 1920s affects them just as deeply. Manny’s evolution in Hollywood is the most significant, allowing him to be one of the few who gets to see how dark the underbelly of the industry really is. But like many people at that time, he hides his ethnicity, claiming to be Spanish instead of Mexican. Having to erase a part of himself for acceptance isn’t dived into deeply, but Calva is able to carry the pain that encapsulates that Hollywood experience. Like Manny, Nellie has to transform for continued success. Her talents, once underestimated, garner her much acclaim as the Clara Bow-inspired “It Girl.” When talkies came along, many stars like Nellie were given a makeover to fit the moral code they had to carry. The veneer of Hollywood sophistication with an accent to rival aristocracy took shape at this time, and stars were no longer allowed to be themselves. While F. Scott Fitzgerald called flappers, in reference to Joan Crawford, “young things with the talent for living,” the Hays Code and 1930s society as a whole, drained people of that joie de vivre. Hollywood sucks the life out of Nellie and you can feel it in Robbie’s performance. However, she also calls out the bullshit gloriously.

If you weren’t, like Nellie, given a makeover to fit into the “new” Hollywood, you were tossed aside. Chazelle shows the truth about how the machine treats its stars as disposable. Jack Conrad experiences this firsthand. Like John Gilbert, to name a few, his career ends with the silents. The spotlight aimed at him his entire career burns out. But in the most powerful moment in the film, he is reminded of his gift. Playing a Louella Parsons-type reporter named Elinor St. John, Jean Smart delivers a monologue that will send chills up the spines of all movie fans with a soft spot for Old Hollywood. She reminds Jack that movies keep the ghosts of the past alive, able to entertain an audience who breathed their first breath decades after the stars breathed their last.

However, the most prominent figures on the black and white screen that are mentioned these days are the Katharine Hepburns and the Cary Grants. The Butterfly McQueens or the Dolores del Ríos of the industry are often neglected. One of the flaws of Chazelle’s film is that topics of racism are lightly touched on and the characters of color, other than Manny, aren’t given much to do. Li steals every scene she’s in, so it’s disappointing to see so little of her and then have Lady Fay disappear (but that’s Hollywood, I guess). With Sidney, Adepo carries so much emotion in his eyes and embodies the pain of all the Black actors of the era. As the jazz man, it’s a shame to not spend a lot of time with him. Some scenes in the film could have easily been cut to explore the treatment and struggles of people of color in Hollywood to a greater extent, or simply to give them a brighter spotlight.

Chazelle is interested in the machine that creates stars, controls them, and spits them out. But his fascination with that comes at the detriment of character’s backstory. And the weaknesses aren’t only in writing. The director is, at first, very controlled, but the madness seems to become too much to handle as the film goes on, making some scenes feel like they came out of nowhere or are out of place, killing a bit of momentum.

Despite its flaws, Babylon is a sensory overload of boisterous energy that’s one of the most epic movie events of the year. With its production design, costuming, and real footage in between, Chazelle successfully captures both a changing industry and city. It’s his own meta-commentary and Singin’ in the Rain, tackling the same subject as the classic musical but in a way that feels more dirty, raw, and destructive. He rips apart the studio-crafted veneer and asks if the price of fame is really worth it.