Skip to content
You are here
Home > Movie Reviews > The Witches Review: The Robert Zemeckis Re-Imagining Is a Hot, Camp Mess 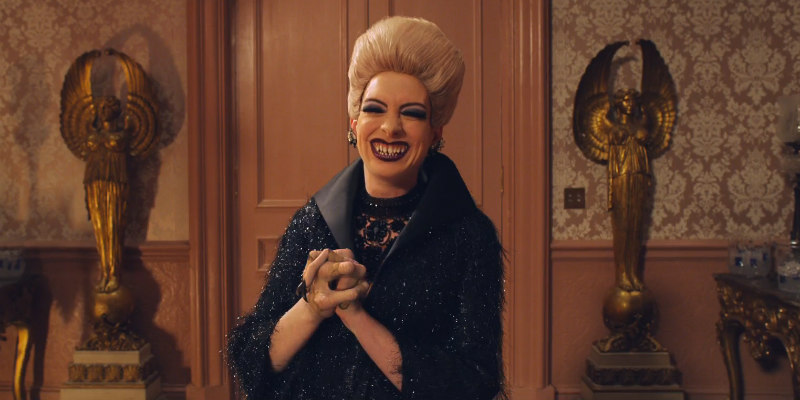 When Roald Dahl saw the film adaptation of his novel, The Witches, in 1990, he called it “utterly appalling.” With a roster of world-class artists like director Robert Zemeckis taking a crack at adapting the classic work to film alongside Guillermo del Toro and Black-ish writer Kenya Barris, also with Alfonso Cuarón producing, the question remains, what would Dahl think of it this time around? As a man hostile towards adaptations of his works, the answer would probably be the same. There are worse films out there than Nicolas Roeg’s The Witches, but how does the Zemeckis helmed version fair? This re-imagining leans more heavily on the book in many ways compared to the 1990 film, and there are both clear similarities and differences – good and bad.

The film follows an unnamed young boy (Jahzir Bruno) in the aftermath of his parents’ death. He’s taken into the care of his grandmother (Octavia Spencer), a tough lady with a big heart and full of sass. The film has been revamped for 2020, set in 1960s Alabama instead of England and with a more diverse cast. Those aren’t the only changes noticeable in the first few minutes, however. We are welcomed to a tale we’ve grown to know so well by a narrated lesson on witches. It’s an off-putting narration by Chris Rock and not as welcoming as the grandmother’s introduction to the witch lore in the previous adaptation. In this way, the film lacks intimacy – the feeling of cuddling up in bed with your grandma as she reads you a bedtime story. The grandmother’s personal experience with witches is still explored later of course, but the story being told with a narration of this kind, used primarily to state the obvious throughout the film, is incredibly distracting.

Dahl’s theme of grief is still present, but much more so than in Roeg’s film. The first half isn’t rushed as it explores a child’s grief to a much fuller extent. Plainly, he’s allowed to grieve in this one, whereas in the original he kind of just moves on. The loss is able to fully set in, and the sadness is felt thanks to Bruno’s affective performance in only his first film as an actor. Little by little, his grandma pulls him out of his grief (not surprising considering Spencer’s infectious energy), but another kind of darkness looms close by. When the young boy has his first encounter with a witch in the local grocery store, he and his grandmother flee to a hotel. His grandmother says they’ll be safe there as it’s only vacated by rich white people, and witches only pray on the poor. The theme of rich versus poor or Black versus white America is a new one, and another way the film has been updated.

Just their luck, a coven of witches is having a conference at the hotel, following behind their leader, the Grand High Witch (Anne Hathaway), like soldiers on a battlefield. The events that follow are familiar: the Grand High Witch turns the young boy and his friend Bruno Jenkins (Codie-Lei Eastick) into mice and the rest of the film becomes a mission to figure out a way to change themselves back while also coming up with a plan to stop the witches from doing this to other children. The best part of the film is the characters in their adorable mice form on their mission impossible. This is a surprising take considering the biggest draw to The Witches isn’t really the narrative itself, but the Grand High Witch – the most disappointing part of this adaptation.

Anne Hathaway in big hats, a turban, with a blonde Miranda Priestly wig, and sporting to die for outfits, she purrs out her schemes in a questionable accent that produces a gag surrounding her comical pronunciation of the word garlic. She takes camp to the max, and it’s fun – to a point. Anjelica Huston’s grotesque prosthetics are nowhere in sight as her look, the biggest draw of the Grand High Witch, takes a back seat. There’s no unmasking. She looks like every other witch: bald with a Joker-like carved smile and pointy teeth. It’s underwhelming and nothing more than lazy CGI. The Witches feels like it’s trying too hard to be scary when it doesn’t need to, with overused thunder and lightning cues and a more dramatized portrayal of the Grand High Witch made to play up her witchy-ness for ineffective scares. Hathaway’s performance isn’t bad, but it’s certainly her most outrageous.

There are some good things within all the faults, though. Octavia Spencer calling out people’s B.S. with a subtle yet forceful, “mhmm,” never gets old; Stanley Tucci as the hotel manager doesn’t get much to do but he wears the hell out of a suit; Kristin Chenoweth voices a child-turned mouse which, if it it was anyone else, would be odd but who cares because it’s Kristin f*cking Chenoweth; the location and sets are absolutely stunning; and Hathaway throws her wig, so at least we get a good meme out of it. In the end, Zemeckis tries, but unfortunately, many will probably think pouring a bucket of water on the whole thing and watching it melt would be a more entertaining time.

One thought on “The Witches Review: The Robert Zemeckis Re-Imagining Is a Hot, Camp Mess”