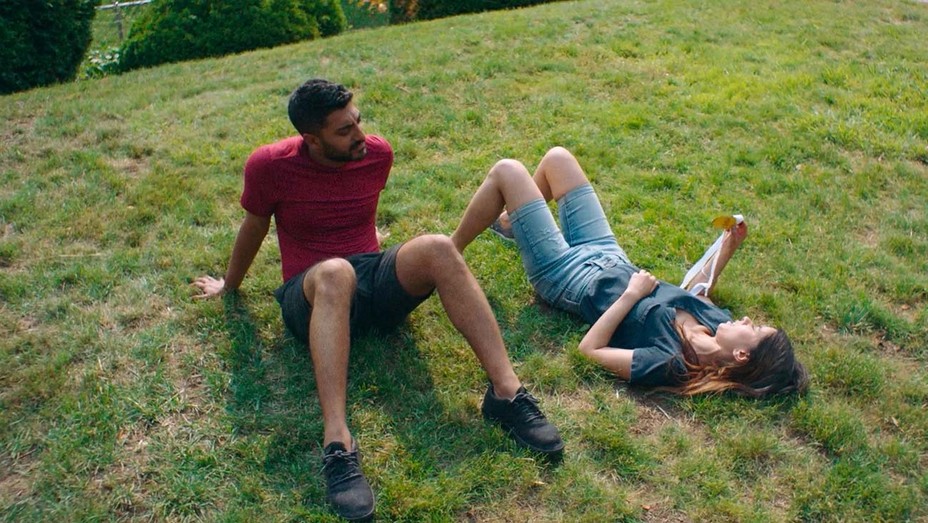 Written, directed, and starring Sujata Day (Insecure), Definition Please follows Day’s Monica Chowdry, 15 years after winning the 2005 Scribbs national spelling bee. Monica stays in her hometown of Greensburg, Pennsylvania, to care for her ailing mother, Jaya (Anna Khaja, The Good Place), after the untimely death of her father. Instead of living out her dreams of leaving town and working in clinical research, she tutors a wide variety of students, but mainly other spelling bee champion hopefuls. When her estranged brother Sonny (Ritesh Rajan, Russian Doll) comes home to help honor their late father on the anniversary of his death, their mother stages a series of events in an attempt to bring them closer together.

Monica, knowing what she wants out of life, but too afraid to leave her mom when she needs her the most, allows the weight of responsibility to fall on her with a tinge of guilt for even considering choosing herself. With Sonny home, Monica is hoping for a quick turnaround with little to no engagement with her brother. Jaya, on the other hand, hopes Sonny’s arrival will allow more quality between him and Monica, serving as a gateway to building a bridge of better communication for the pair. On some level, Jaya’s calculated attempts work, albeit via a dishonest approach that despite consequence, she takes nonetheless. The surprise visit ultimately forces the siblings to face the realities of the truths they have been avoiding, but not until their collective world comes crashing down.

Amid several reveals, one is that Sonny is navigating mental illness. Not inherently clear to me until one specific dinner scene, I admittedly missed the understated shifts in Sonny’s tone and demeanor. With his character in particular, maybe it is subtle and the everyday portrayal that Day was going for. It was not until the second watch that I picked up on the small details and hints along the way that broke down more of Sonny’s journey. In the end, Sonny and Monica have to learn how to support each other, create firm boundaries, and have empathy as they navigate the challenges that often come with ever-changing relationships between siblings once adulthood comes into play.

Day is clever and warm in her portrayal of Chowdry, earnestly conveying the complexities and triumphs that exist for this Indian-American family, merely trying to survive life. Digging into the layers of mental health stigmas, sibling rivalry, ailing parents, and the sacrifices that often fall upon one child when parents need them the most, the film delicately balances comedy with dark undertones. For her first feature, she assembled the perfect cast to take the audience on a deeply engaging and authentic ride. During the Chowdry family’s quest for reconciliation, Monica is surrounded by people who supported her on this journey. Through best friend Krista (Lalaine, Lizzie McGuire) and love interstate’s Richie (Jake Choi, Single Parents), Monica is not only adored but also pushed to be the best version of herself. They steadily encourage her to put her needs first in every area of her life.

Definition Please is funny, heartwarming, and endearing. It represents the kind of transparent content that Black and brown people have been advocating to have. We need and desire more familial dramedies from women of color that show the struggles we often go through, make fun of the silly things that our parents told us, reveal the humanity in our shortcomings, and center how we find ourselves. Definition Please eloquently honors Indian culture and showcases unique perspectives that set our characters on a path of healing, redemption, and reconciliation, while also finding love and finding their way back to who they were always meant to be.

While I did want more best friend time between Monica and Krista, and even more time with Richie wooing Monica, I can appreciate the richness of the layers I saw between the Chowdry family as they navigate how to move forward after grief. It is no coincidence that the film begins with a young Monica spelling the word Opsimath because, by the conclusion of the film, you realize this best describes her life, someone who begins to learn late in life. Later than she expects, Monica learns how to balance living her dreams with honoring and loving her family but also finally committing to herself!

Mr. Rogers’ Neighborly Advice Leaves Much to Chew on in ‘Werewolves Within’

One thought on “DEFINITION PLEASE Review: Sujata Day’s Debut Feature Is A Must See Film!”