Skip to content
You are here
Home > Movie Reviews > Mr. Rogers’ Neighborly Advice Leaves Much to Chew on in ‘Werewolves Within’ 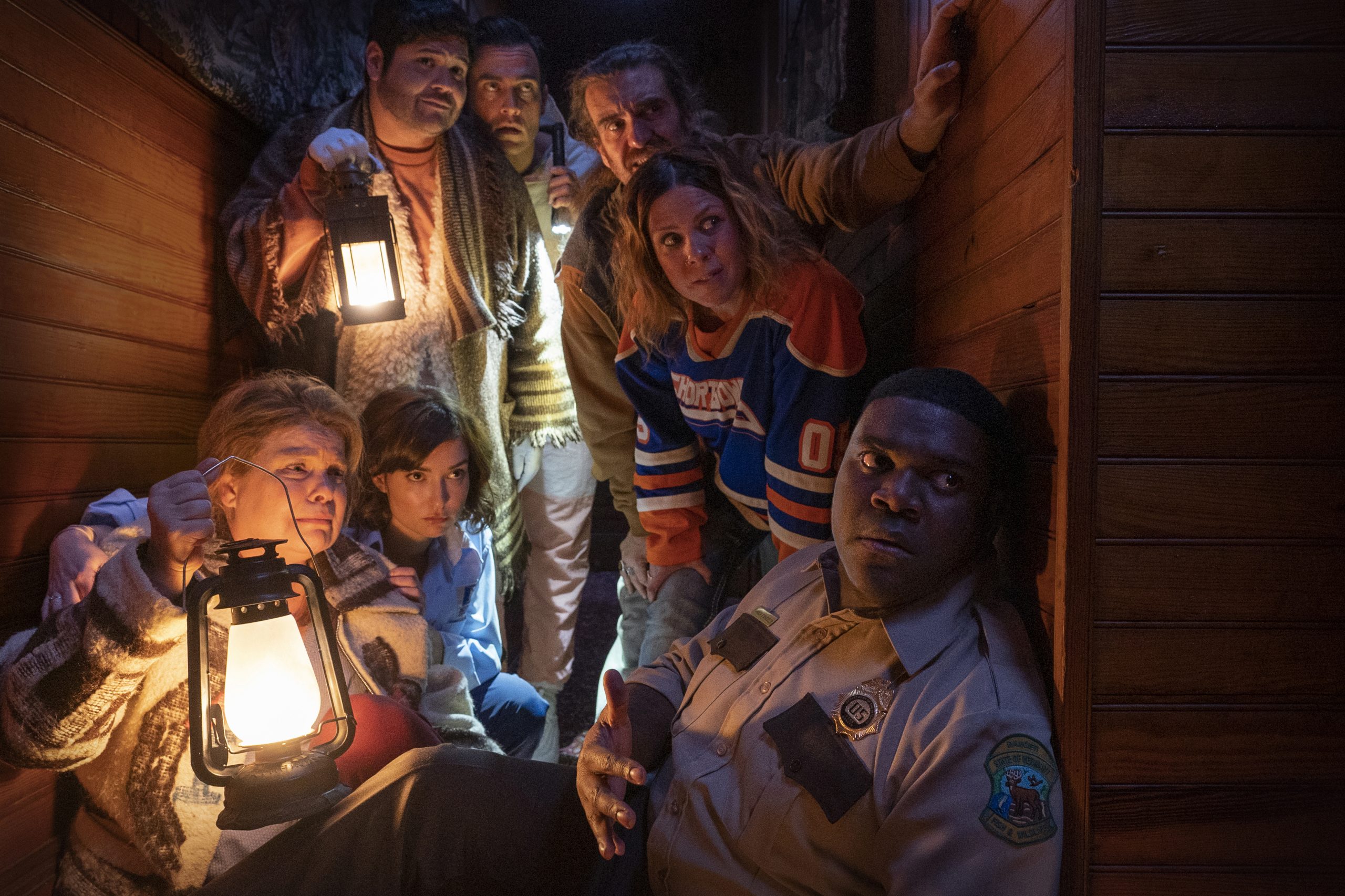 In Werewolves Within, Harvey Guillén’s Joaquim describes the whodunnit he finds himself in as a “dinner theatre murder thing.” One where he’s having “a horrible time and can’t go home.” Understandable, since this detective story involves a werewolf. Based on the medieval fantasy game of the same name, the film plays out much the same way. While players come together in virtual reality for the game, the audience now gets a front-row seat to watch as the players, or in this case, characters, attempt to solve the mystery of who among them is a werewolf in disguise. A part of game nights since 2016, Ubisoft now brings Werewolves Within to life through the lens of Josh Ruben and writer Mishna Wolff. Like Clement and Waititi, Craven and Williamson, and Landon and Lobdell before them, Ruben and Wolff prove to be a dynamite twosome as they usher in another take on the comical side to the horror genre, and in the process crafting a werewolf tale that’s both literal and allegory.

The film opens eerily and with a song that contrasts the tone in its beat but fits perfectly in its lyrics. An obscure, 1950s Halloween-themed pop song titled, “The Phantom Strikes Again,” is heard just as a kind of phantom is about to strike. Like most whodunnits, its setting is a grand house. Sitting atop a snowy hill, its windows peer to the action on the group below, looking to stare as the sharp snap and the quick rustle of bushes and branches are heard. Then, with a growl and heavy steps, the phantom approaches its prey. A deadly intro to the story of the town of Beaverfield, currently divided by a pipeline proposal. Some want it, some don’t, and the film’s forest ranger leading man, Finn (Sam Richardson), just wants to do his job.

Finn checks into the Beaverfield Inn which seems more welcoming now than it did in the film’s opening scenes. There he begins to catch a glimpse at the colorful crowd he’ll find himself cooped up with soon enough. There’s the heartbroken Inn owner, Jeanine (Catherine Curtin), whose husband supposedly ran off with another woman; there’s the greedy oilman, Parker, who’s trying to buy Jeanine out for her property to start building his pipeline through it; and then there’s the bubbly, mailperson – “gender is a construct” – Cecily (Milana Vayntrub) who you can always turn to when you need hot gossip. With a storm on the way, Finn heads out with Cecily to help deliver one last package. Everything about this conservative small-town is questionable she says, and along the way, Finn meets an even bigger cast of questionable characters. The eccentric Trish (Michaela Watkins) – with a bland husband (Michael Chernus) and yappy dog – who makes Christmas tree angels out of shampoo bottles and hopes to open her own craft store; the asocial environmentalist, Dr. Ellis (Rebecca Henderson); tech millionaire couple, Joaquim and Devon (Cheyenne Jackson); the frightening, fur-wearing hunter, Mr. Flint (Glenn Fleshler); and a couple to stereotypical smalltown hicks, Gwen (Sarah Burns) and Marcus (George Basil). Either the townsfolk are overly friendly or far from it. However, none are neighborly and don’t understand the definition of what it means to be. Ruben makes the curious choice to open Werewolves Within with a quote by Mr. Rogers: “Listening is where love begins: listening to ourselves and then to our neighbors.” A quote by the kindest man who ever lived seems unlikely to fit the tone of a werewolf movie. But what he stood for and why it’s important to this narrative is made clear when the town congregates at the Inn when the storm finally hits.

As the power goes out and snow begins to fall, Finn takes it upon himself to walk back to town and get the generators back up and running, but he discovers that they’ve been slashed to bits as though someone or something made the town go dark deliberately. To make matters worse, he finds a mutilated body. They lock themselves in the Inn for safety, but as the title suggests, the werewolf is among them. Tensions are high as everyone’s contrasting personalities clash, and it only rises when one of them is attacked and the doctor concludes that the werewolf has to be one of them. Just as the lyrics of “The Phantom Strikes Again” ask – “Say, who could it be? It’s a mystery!” – suspicions arise within the group, allowing the audience to participate in a fun guessing game of who the werewolf could be. It becomes a game of social deduction, but who believes in the existence of such a myth, anyway? Trish certainly doesn’t, concluding that someone is just trying to scare them to take money away from honest, hardworking people – the money they are going to get if they let Parker build the pipeline. There’s irony in this statement because there’s no honesty in what Parker is trying to achieve. There’s nothing “harmless” about a pipeline, as it’s so described, and if the werewolf is used as an allegory, it definitely isn’t harmless. Ripping apart its victims as oil companies do to land that’s not there’s. The greed of the oilman pits this community against itself.

Werewolves Within is amusingly chaotic – comedic energy with a sharp script about community and a dash of politics. In a film of its relatively short runtime, and with so many characters, it’s commendable how well-written and well-rounded everyone is. Especially Finn and Cecily whose flirty conversations are both enticing and insightful. The reveal of who the werewolf is is also well-crafted as to not be obvious and take the audience by surprise. The performances of the cast can be praised for this, too, as no one slips to even give the slightest hint as to who dun it. It’s also refreshing to see a Black actor lead in such an entertaining horror film. We’re used to seeing Black characters in horror with the mark of death on their backs – seen as recently as A Quiet Place II – but Richardson as Finn isn’t there to die first or to aid the progression of the white protagonists’ story as the friend or funny sidekick. He’s a character with substance and not only there for the sake of diversity either. He’s written with likability and sensitivity and is the leader of the group. He commands the room in the hope that he can help the town survive.

Werewolves Within is a film whose goal is to emphasize common humanity which is often disregarded as people fend for themselves selfishly rather than band together. Josh Ruben and writer Mishna Wolff let the audience laugh fear in the face as they welcome us to their freakshow.