Skip to content
You are here
Home > Movie Reviews > Sundance Review: Nine Days Is Heartfelt In Its Every Beating Minute 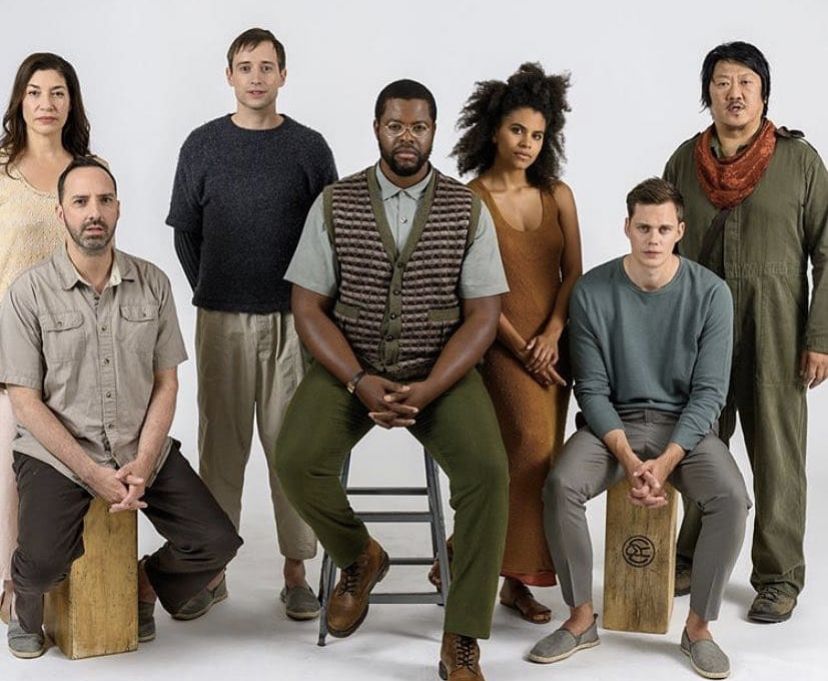 Off in the desolate plains lies a simple wooden pitched-roof house. It’s Norman Rockwell warm; it’s a coziness, unlike a John Steinbeck novel. Inside, an imposing Black man with circled-rimmed glasses and suspenders sits. He watches a wall of televisions stacked on top of each other in rows and columns, playing videos of VHS quality. The videos are events: memories of the past, live streams of the present, a tangle of souls. Edson Oda’s daring debut feature Nine Days hints at dread, quietly nurtures mirth, and flourishes in beauty—wafting through existence and the void in equal beguiling measure.

Will (Winston Duke) is that circle-rimmed man, externally revolving through these videos, internally through his regrets. He lives on this solitary plane, somewhere between purgatory and the afterlife. But it’s a disastrous event he witnesses on one of the televisions that truly unhinges him. As a result, he coaches a number of candidates ranging in temperament and personality. The carefree Emma (Zazie Beetz), the calculating Kane (Bill Skarsgård), a selfish Alexander (Tony Hale), and a frazzled Maria (Arianna Ortiz) are the main players. And without spoiling anything—they’re all fighting to live.

The only other person in this universe is Kyo (Benedict Wong, here again for all your character actor needs). He’s friends with Will. Tangentially connected with Will’s work for reasons we’re initially unaware of, he describes his buddy as a “prodigy” and “gifted.” Will, for his part, is suffering from an internal struggle—encapsulated in his appearance. While he’s a large man, he’s also soft-spoken, dressed as a pencil-pusher.

Nevertheless, he often displays spikes of anger. The anger he often unleashes on his preening yet fearful trainees, each hoping to merely exist. And in some sense, Nine Days isn’t just a film about existential dread, it’s a narrative about salvation and forgiveness. In fact, through much of Oda’s screenplay, Will often poses hypotheticals to his trainees. For example, in one he asks each person to choose between sacrificing an imaginary son or saving a group of people ordered to death, which would they choose. To a point, the hypotheticals are meant to expose a moral flaw or a lack of resolve on the part of the trainee. But more than anything else, they reveal the hurt within Will.

Even so, both Emma and Kyo tirelessly fight to connect with Will, to soothe his self-loathing. But when we’re unhappy with the person we see in the mirror, there’s rarely a remedy for our skewed self-reflection. To these ends, Beetz delivers an ebullient performance in a thoughtful yet low-stakes role. It’s refreshing to see her not attached as arm candy to a toxic lead like Joker’s Arthur Fleck, or portraying a skeezeball’s lover, as her role in Lucy in the Sky. Moreover, Wong finally gets some dramatic scenes to thrive in, exhibiting a range always present in him, even when the scripts weren’t.

Oda, even in his first feature, displays a steady handle on Nine Days’ magnificent craft. Wyatt Garfield’s primary-soaked cinematography is often euphoric, orchestrating poignant scenes involving beaches and bike rides to high art. Antonio Pinto’s score oscillates between rustic and elegiac, uplifting yet calming. And the picture’s sound design is immersive, engendering a pathos on the part of the viewer to breathe in awe.

Nevertheless, it’s Duke, in the best role of his young career, who completely enraptures and elevates his work. In Ryan Coogler’s Black Panther he was the one-note yet scene-stealing M’Baku; while in Jordan Peele’s Us he portrays a goofy dad. Here, the contours of his character are deeper, and his performance more expansive. It’s difficult to go from quiet to loud, as Duke does with the roar of his voice. Nevertheless, when he’s in emotional turmoil, broken from his stoic veneer, the scenes are never contrived. He exemplifies regret; he exhales depression. And in the existential dread of his trainees, each unnerved and desperate, he’s magnanimous and concerned. In short, Duke must be everything to everybody, including himself, and in this challenge, his talent is put on view—especially in one cathartic scene where the meaning of Walt Whitman’s poem “Song of Myself” bursts like rays across the dusty open plains.

Oda’s Nine Days is a slow burn, patiently worldbuilding over its 124 minutes. But its genius, enveloping every scene with the keen introspection that accompanies loss and love, challenging the viewer to live life to its fullest extent, never wanes. It’s a sincere and ingenious rumination on existing, on the gift of waking up every single day. And most of all, it’s a whisper into the ears of those most emotionally vulnerable, who forgive the most, and are hurt the most. Nine Days was nearly my favorite film of Sundance, evocative and heartfelt in its every beating minute.