Skip to content
You are here
Home > About > Sundance 2021 Reviews: Coda, Marvelous and the Black Hole, On the Count of Three, One for the Road 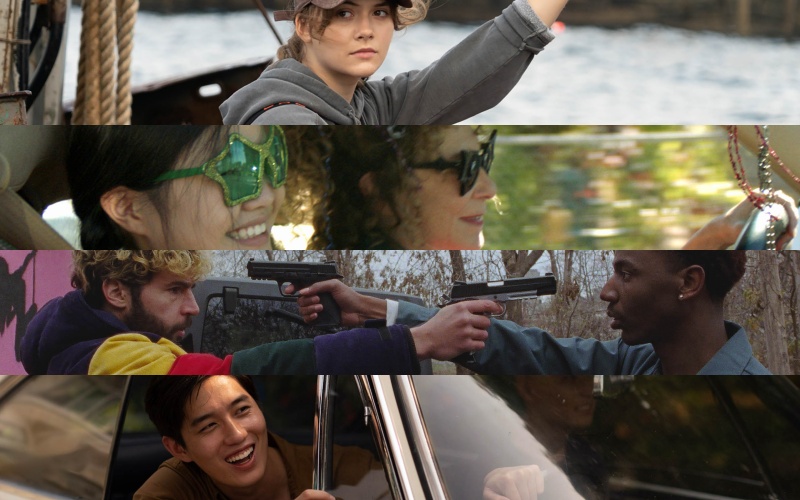 It’s difficult to capture the beauty of Coda in words. It’s something that needs to be experienced as a stepping stone for more deaf representation in film. Siân Heder’s writing and direction make the audience wonder why we’ve never had a story like this before. And that question is pondered even more so by the heartwarming, powerful performances by its cast.

The importance of its title may not be obvious at first, but Coda stands for Child of Deaf Adults. In a film about a community of struggling fishermen, Ruby (Emilia Jones) is the anchor. As the only hearing person in her household, she struggles to juggle being just a regular teen while also being her mother (Marlee Matlin), father (Troy Kotsur), and brother’s (Daniel Durant) interpreter. The latter two can’t go out to sea without her. Her family can’t do a lot of things without her, this weighing heavily on Ruby’s shoulders. Out of this arrangement, though, comes a lot of the film’s humor with scenarios where, for example, she has to translate for a doctor that her parents have “jock itch” or the classic making someone sign something they don’t mean. We not only see the difficulties of being a deaf person, but also the difficulties of being a hearing person in that environment. An environment where everything is loud because her family can’t hear how noisy they are. All four of the film’s leads create an entertaining, infectious dynamic. With the majority of the family living with a disability, the film makes sure to emphasize that they’re just a normal family. Ruby is so used to seeing them being laughed at and treated like freaks she forgets she lives in a home that many from broken ones dream to have. This, combined with touching scenes between Jones, Matlin, and Kotsur, create a film that radiates with love and warmth and makes for many tear-jerker moments.

As the sharp-tongued Ruby, Locke & Key actress Emilia Jones delivers an outstanding performance and proves to be exceptionally multi-talented as the role requires her to sing. Ruby used to be bullied in school for talking like a deaf person, but after joining choir to get close to her crush, she comes out of her shell. The narrative then becomes one about her searching for her voice in a world where she’s used to no one hearing her. It becomes a struggle between wanting more for herself like going to Berklee versus not letting her parents down, which we can all relate to. She’s seeking independence, and when her choir teacher asks her how singing makes her feel, the only way she can explain it is through sign. You don’t know what she’s saying, but you can feel it. It’s the most powerful scene I’ve seen in a long time. And while her parents will never be able to hear her, the film shows the importance of inclusivity so they can still enjoy her song.

MARVELOUS AND THE BLACK HOLE

Marvelous and the Black Hole is, as the title says, marvelous – a coming of age film from an exciting new filmmaker with a star in the making at its center. Kate Tsang’s feature film debut follows an unlikely friendship between two people at two completely different times in their lives, but both come together to discover that they share similar pain.

We meet Sammy (Miya Cech) at the darkest time in her life. One of depression and loneliness caused by the loss of her mother. She’s a teenager in rebellion and grief – stuck in a black hole that matches her all-black style. Because she’s a teen on a violent streak, her dad threatens to send her to a juvenile delinquent camp if she doesn’t start behaving and do well at school. There she meets a magician named “Marvelous Margot,” (Rhea Perlman) an intriguing woman who resembles a Miss Frizzle-type figure in her eccentricity and unruly hair. Margot is curious about the girl with an attitude that is a reminder of her teenage self. And it’s quickly evident that Margot’s going to be like a grandmother figure to her as she shows tough love from the very start. After using an unenthusiastic Sammy as her assistant for a magic show at school, Sammy becomes fascinated by Margot’s tricks. Margot comes at a time of big change for Sammy as her dad wants to get married again, and Margot teaches her magic as a means of escape – an outlet to let out all the pain she’s been carrying. A friendship quickly begins to grow, and it’s such a treat to watch these two together on-screen as Margot brings happiness and magic back into Sammy’s life, taking her out of the black hole that has manifested inside her.

What makes writer-director Tsang an exciting visionary is her beautiful eye for storytelling in the way she captures Sammy’s mother’s bedtime stories. There are stunning mythical black and white images that feel to have drawn inspiration from filmmakers like Kurosawa. The way that Sammy’s mother looks at the world, as indicative of these recorded stories, feels similar to Margot’s, whose magic we come to know has heartbreaking significance. Through all this, Tsang builds to a beautiful ending about the power of love and family, making her mark in a crowded genre.

ON THE COUNT OF THREE

Peak existential crisis would definitely be two friends holding guns to their heads in the back alley behind a strip club. That’s how Jerrod Carmichael’s sharp dark comedy begins. The friends at the film’s center, Kevin (Christopher Abbott) and Val (Carmichael), have both tried and failed to kill themselves. They share a love for each other, and now, a desire for death that brings them closer than ever. After Val breaks Kevin out of a mental institution he’s spent the last few days in, as a result of his suicide attempt, they agree to kill themselves by day’s end. I don’t think anyone knows what they would do on their last day alive, but for Kevin and Val, it leads them to seek both redemption and forgiveness.

Reminders of life’s gifts are everywhere in On the Count of Three, and they feel emphasized due to the film’s grim subject. The film relies on the effectiveness of the chemistry between its two leads. Through their colorful banter and exploration of this friendship, the audience is provided with some incredibly nuanced conversation. Carmichael’s directorial debut, with the help of writers Ari Katcher and Ryan Welch, is full of compassion for its incredibly dark narrative and what these characters have and are going through. As Val discusses how suicidal thoughts bring him relief and comfort, and Kevin grapples with the repressed memories of childhood trauma, it hits home about how important it is to seek help. And the depression the characters are suffering from is deeply felt, especially when juxtaposed with Travis Tritt’s “It’s a Great Day to be Alive” playing in the background. It’s a film that even those who don’t suffer from mental illness can relate to as the feeling of being stuck in monotony and not being able to just live is universal.

On the Count of Three is the bromance movie, and these two bros go on one hell of a ride together. And as they relive old memories, the sound drowned out completely for only piano keys to be heard, there’s a stillness that creates a reminder that life isn’t all bad.

ONE FOR THE ROAD

Baz Poonpiriya One for the Road begins with two people, in two places, and with two tones in opposition. In Bangkok, a man named Aood (Ice Natara) sits in tears in his car on a still night, nothing but the radio for company. Deleting contacts from his phone and looking over at the pills on the passenger seat, you can only think the worst. Thousands of miles away is a bartender named Boss (Tor Thanapob), attempting to woo the ladies with his skills behind the counter. The soundtrack is jazzy – it’s the Manhattan nightlife. These are old friends separated for ten years, but when Aood phones Boss to break the news he’s dying of cancer, he says he has something he wants to do before he dies and asks Boss for a favor: return to Thailand.

Director Poonpiriya and co-writers, Nottapon Boonprakob and Puangsoi Aksornsawang, have created one of the most beautiful and heartfelt road movies. Death is inevitable and we’ve all thought of our mortality at least once in our lives, but how many of us can say we know what we want to do in our final days? A morbid thought, and is more often than not something you can’t plan for. Aood, however, knows what he wants to do with his time left: return something to each of his exes. The film is split into sections, with each ex’s name on a cassette. The camera producing a cool closeup on the tape as it spins – one part of his life plays until Aood has to flip it over to another. Music is an important part of the film, as Aood’s dad, who died of cancer, used to host a radio show which he still listens to on tape. The songs chosen perfectly fit into each scene. As his father dedicates his next song to “everybody who lingers in our thoughts, then now and forever,” “Tiny Dancer” plays. As Aood dreams of what was and what could have been, “Dreamer” plays. (The film also has a fantastic original song called “Nobody Knows” by Christopher Chu and STAMP.) It’s a film that’s so stylish and producer Wong Kar Wai’s influence is felt in a very humanistic story that’s bold and colorful in cinematography. It also has two brilliant performances from its two leads. Boss seems so put together, so suave, but there’s a great pain lingering underneath that Thanapob must carry throughout the film. Natara plays a character who’s weakening with every step he takes, and it’s a transformative performance as the flashbacks of Aood before his cancer diagnosis makes it seem like we’re watching a completely different person.

As Boss drives his friend across Thailand to fulfill his final wish, Aood opens his eyes to the fragility of life. Aood goes on a path for redemption in a way as he attempts to make up, forgive, and be forgiven. Ultimately, saying goodbye to everyone he’s loved throughout his life, even if the relationships ended bitterly. Through this process, Boss returns to his family to seek to forgive them and chase lost love. It also digs deep into their relationship as friends, opening old wounds, and make peace with their past together, too. One for the Road is a celebration of life that’s also incredibly emotional. It reminds us that parting from those we love or once loved is natural, but we always take something from those relationships on the road forward.

New York City: Win Tickets to the World Premiere of The Many Saints of Newark