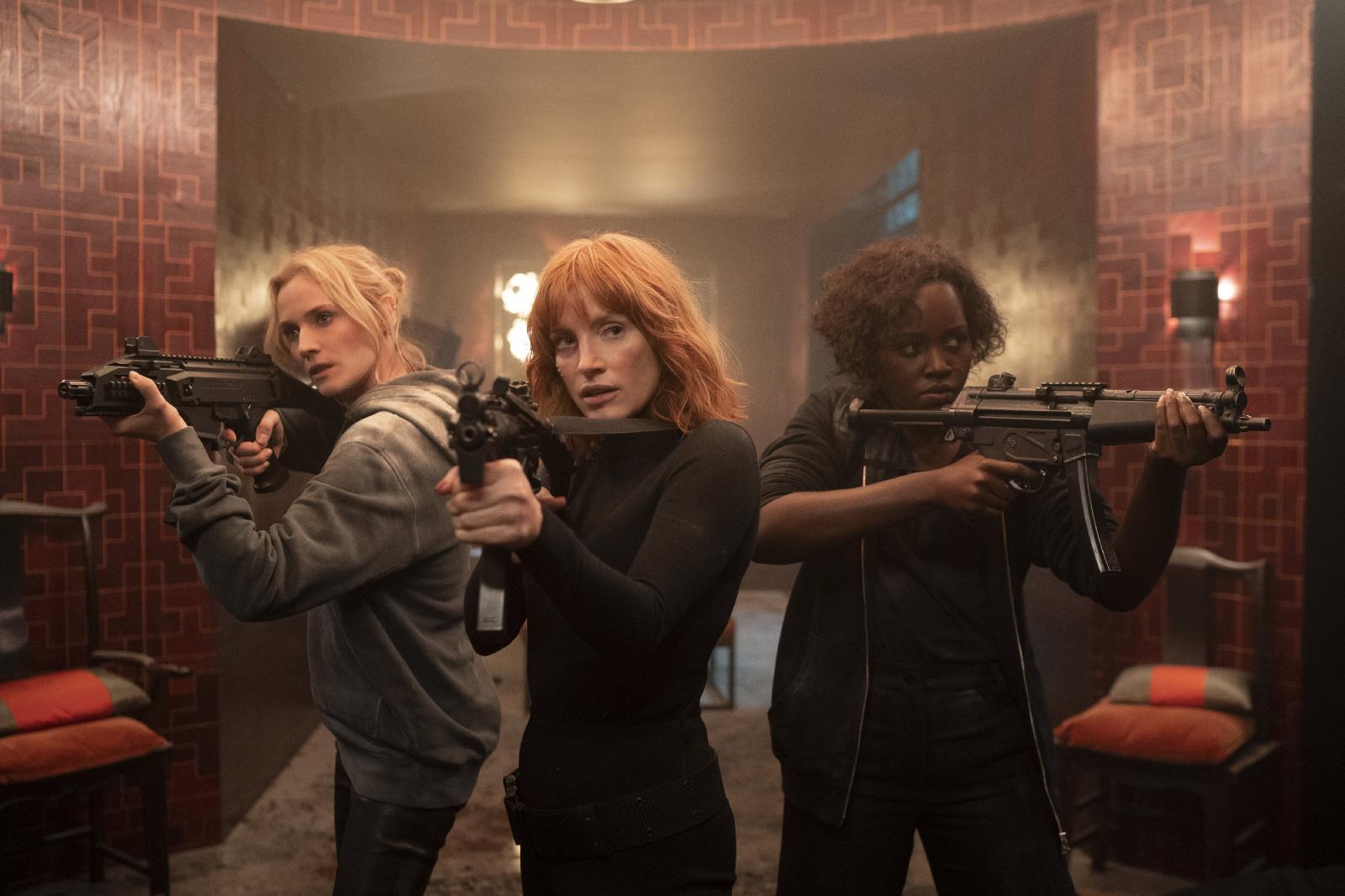 Simon Kinberg’s debut feature as director, X-Men: Dark Phoenix, was polarizing for both critics and fans. His latest film, The 355, will sadly be marked by similar results. In trying to be its own “girl power” Jason Bourne, its screenplay sticks to a by-the-number formula. The film’s leads travel the world, attend a glamorous gala, must protect humanity from an apocalyptic threat, and find themselves double-crossed along the way. Despite its similarity to the masculine narratives that have dominated its genre, it’s incredibly solid, entertaining, and action-packed. Also containing predictable elements – agency corruption and the downfall of powerful, greedy men – but these spies are always met with a twist that keeps the narrative interesting. The script by Theresa Rebeck and Kinberg is tight, with surprising cleverness in its dialogue that questions and calls out the cliches and tropes in spy films. While some issues lie in how the characters are written and in some of its fight scene editing, there’s never a dull moment. It has everything you could want out of a spy thriller, with some of the best women in the business kicking ass.

The 355 opens in a Colombian mansion with men conducting dirty deeds. What’s thought to be a drug deal turns into something that those that have come with hefty pockets weren’t expecting. A drug of sorts is being sold: A drive. This technology can access anything on the net, penetrate its deep recesses like drugs and the human brain. Its use leads to destructive results; it can blow up a cargo plane with the push of a button and cause cities to go completely dark. It’s a dangerous toy as potent and addictive as their usual drug of choice. But like all drug deals, it goes bad. As bullets fly and shell casings bounce off the floor, the drive falls into the hands of Luis (Édgar Ramírez), a NID (National Intelligence Directorate) agent in Colombia. The CIA enlists the fiery and skilled Mace (Jessica Chastain) to track him down in Paris and get the drive. Under the cover of honeymooners, she brings fellow agent Nick (Sebastian Stan) in tow. Their chemistry sizzles and their romantic affections fall into tropes that are both called out and short-lived as the serious stakes set in.

It becomes clear that the CIA isn’t the only agency after the drive and Mace has much competition ahead of her. Along the way, she meets several women who together will form The 355, named after Agent 355 who was a female spy during the American Revolution. There’s Marie (Diane Kruger), a rival German BND agent. Marie is sure in her mission and herself, refusing to take orders from any of her superiors. Mace has a similar passion for the mission, and the actresses play superbly off each other as opposing forces. Another member of the team is Khadijah (Lupita Nyong’o) whom Mace seeks out for help. As a former MI6 agent now working in cybersecurity, invisible foes that can control every part of the world are the kind of threat she lectures about, so convincing her to join is easy. Rounding out the group is Graciela (Penélope Cruz) who’s thrown into the mix unwillingly because of her connection to Luis. She’s just a therapist working with the Colombian intelligence agency. She’s not an agent, but with a target on her back, she needs the others for security. Her pleas to go home in the middle of a gun blaze make her the most relatable character and also the one with the most at stake as the only person in the group with children. “The enemy of my enemy is my friend,” as they say, and they take this phrase to heart as they attempt to build trust on a mission whose failure could mean the end of the world.

There’s never a dull moment in The 355 because, just when the audience and the spies themselves think they have a grasp on what they’re dealing with, they’re surprised with a twist. The action impresses, too. They get into plenty of close scrapes and find clever ways to get out of them, with the female cast getting the majority of the big fight scenes. They’re well-choreographed, but often hard to digest when filmed in tight spaces. There’s also a thrilling foot chase through the streets and subway tunnels of Paris that feels refreshing. Spies, especially female ones, can often be sexualized, but Mace at that moment is running, gun drawn, in a flowery red dress you could find her wearing on Sunday brunch. These characters simply look like the rest of us and can hide easily in plain sight, making each strike so much more satisfying. The action continues with the arrival of Fan BingBing, the final member of The 355. One of the film’s disappointments is the writing of her character and her appearance so late in the film. While she does get to kick ass, we are never provided with a full picture of who she is, lacking in characterization in comparison to the other characters. The film’s main villain who was the catalyst for events, having been the original intended buyer of the drive, is also completely left on the back burner. He’s so bland even his name disappears from memory instantly as the credits roll.

Despite a very underwritten villain, the stakes are incredibly high, and stressfully so. There are also surprising moments where the narrative gets very serious and upsetting as the women learn what they’re really dealing with. It’s the main group of four that holds the film together. While it would have been interesting to get even more backstory on each, the history between Mace and Khadijah for example, seeing how their relationship changes over time and how they build trust is the film’s highlight. Especially how Mace goes from kicking Marie down some stairs to forming deep respect, and vice versa. Or how Graciella develops the same passion for the mission and brings some skill of her own during the spy action. There are surprising bits of humor in their interactions too.

Is The 355 something narratively that we haven’t seen before? No. But does it have to be? Films like this always feel fresh in a way when women take control and take their seat, but if being “generic” is the issue, who is responsible for completely reshaping an entire genre’s formula? What’s for sure is that in a rain of bullets, The 355‘s ensemble and filmmakers have created an enthralling action piece about the indestructible bonds built from feminine fire and fury.