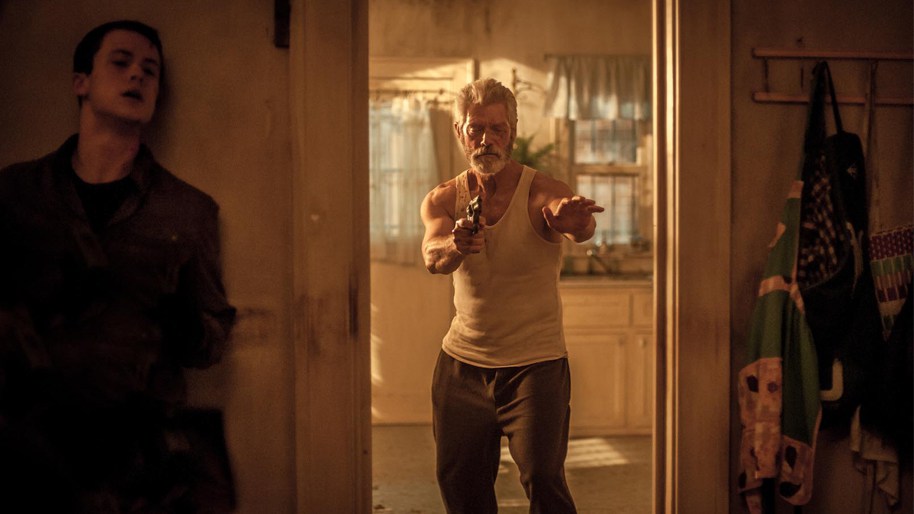 Don’t Breathe opens up with a group of teenagers, Rocky (Jane Levy), Alex (Dylan Minnette), and Money (Daniel Zovatto), breaking into homes while using the security codes stolen from Alex’s dad to steal their items and sell them to save up enough money to leave Michigan. The group is tipped off about a former Gulf War veteran’s house that may contain a six figure settlement for a wrongful death suit of his daughter. The group decides this could be their meal ticket out and goes to the owner’s home to complete what they hope will be their last job. When the teenagers arrive, they case the house and soon find out the man is blind (Stephen Lang) which entices them, even more, to go through with the job.

When the teenagers break into the home they quickly try to find the blind man’s money. All is going well until he wakes up and discovers someone has broken into his home and eventually kills Money. What the blind man does not realize is there were two more intruders that he must now find. This movie takes you on an insane ride with twists and turns that you could never imagine. In the beginning of the film, you feel sorry that these teenagers are robbing this poor blind man but then soon find out the blind man has a dark secret that gives a huge reveal in the latter part of the film.

The genre of this film is considered horror but there are no supernatural entities at play. The true fear in the film comes from the realistic backstory of the blind man and what makes him truly dangerous. If you are looking for a film that will have you on the edge of your seat in fear, this is your movie. Unlike many films in its genre the storyline comes off real and the character dilemmas are relatable. The characters actually have some depth which makes it hard for your to choose a side of who is right or wrong. This is  a no brainer go and PAY to see this film in theaters you will not be disappointed.

Don’t Breathe opens in theaters everywhere on August 26th. Get your tickets now at Fandango! Have you seen Don’t Breathe? Vote and Comment on how you felt about the film.