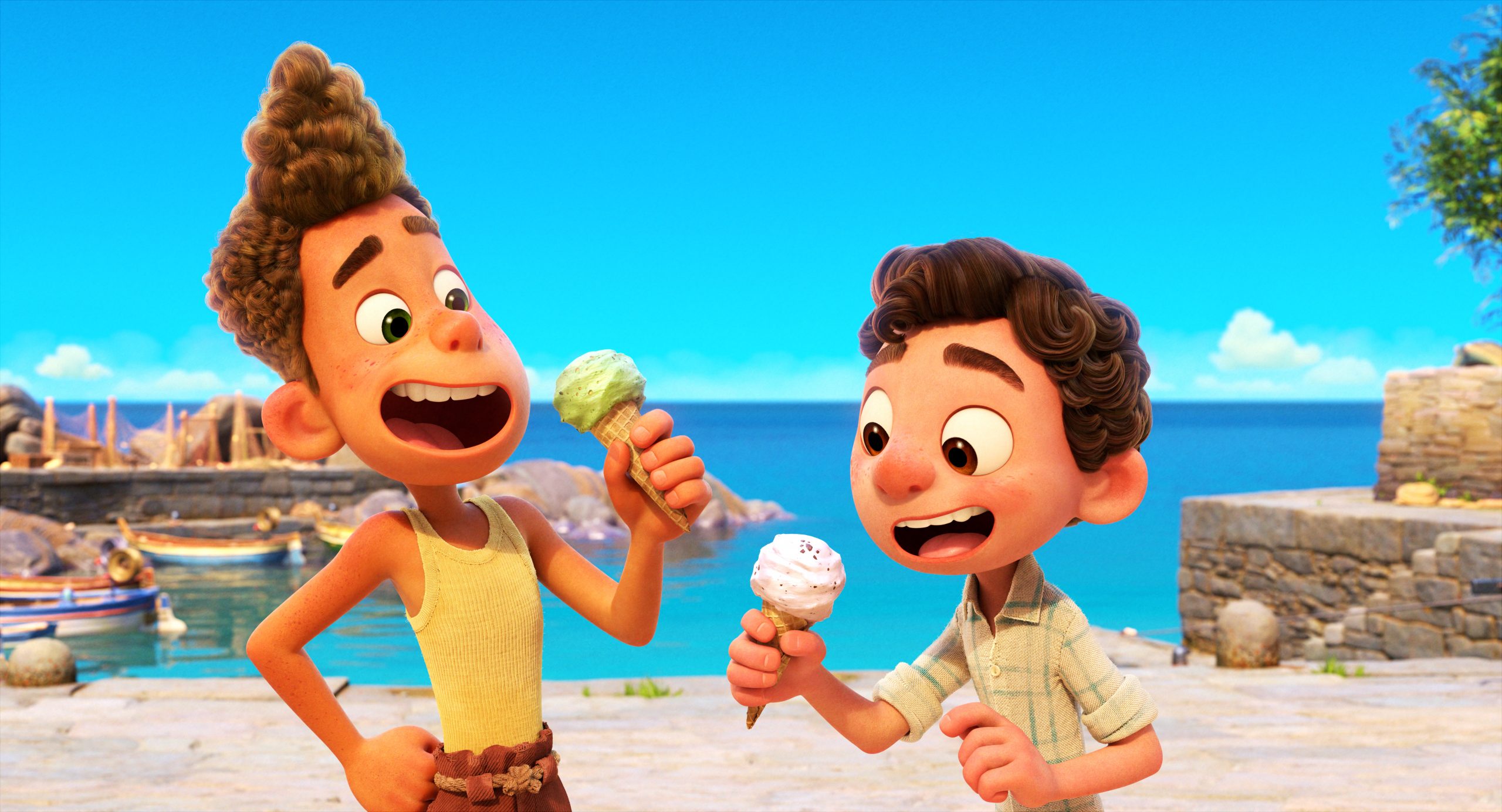 Italian director and storyboard artist, Enrico Casarosa, has established what kind of stories he wants to tell. His short film La Luna, and now his feature debut Luca, are both films set in Italy and inspired by the filmmaker’s childhood. The films’ characters coming of age in an individualistic and unique way, wrapped in similar animation with the richness and brightness of something from the pages of a children’s storybook. A love letter to the summers of youth, Luca is a heartwarming and adventurous story about friendship, acceptance, and celebrating the underdog.

Luca (Jacob Tremblay) wants to be where the people are. He’s a child of the sea who has never been above water. He’s what humans call a “sea monster,” and to him, humans are known as “land monsters”. But their worlds aren’t that much different. Luca lives on a sea version of a farm, herding grazing fish instead of cattle. It’s monotonous and boring until he finds treasures that have come from the human world. Like Ariel with her trove, Luca is fascinated by these wonders. He begins to speak of the surface with his family but they’re quick to remind him of the “terrors” that await there. He’s told never to go anywhere near it, but when he meets another young boy, Alberto (Jack Dylan Grazer), who drags Luca out of the water, he discovers something that he doubted was ever possible: Those of his kind have the magical ability to take a human form when dry. Stepping out of his comfort zone and onto a pair of human feet, he’s in wide-eyed wonder as he sees land for the first time. He’s overcome by curiosity and excitement brought on in part by Alberto’s self-described expertise on the human world and he shows Luca various examples of why everything good is above the surface. He becomes like a brother to Luca, and once he feasts his eyes on the image of a Vespa in Alberto’s hideout, they both begin to dream of going to the “human town” to get one of their own. It’s a symbol of possibility and freedom that this introverted, rule-following kid so desires but the guilt of disobeying his parents weighs on him. He has so many dreams, all rendered in beautiful animation, but they dissolve out of fear that his parents will discover his secret. And when they do, his mother (Maya Rudolph) threatens to send Luca to the darkest depths of the ocean. She just wants to protect him, but his desire to see the world and learn all he can is so strong that he doesn’t seem to worry about the possibility of never seeing his family again. Nevertheless, he escapes from his mother’s overprotective, albeit loving, arms and to a place he thinks she won’t follow: The “human town.”

In Luca, sea monsters are a metaphor for feeling different and excluded – wanting to be a part of something. And the film’s young fish out of water does everything he can to try to be a part of the human world of Portorosso (a play on Studio Ghibli’s Porco Rosso). He gets to finally be up where they walk, up where they run, up where they stay all day in the sun, but he isn’t wandering free. In this fishing village are nothing but images of men killing sea creatures, and the men who live there want nothing more than sea monster blood at the end of their harpoons. Especially the burly, one-armed fisherman father of Giulia (Emma Berman) – an outgoing and fiery adventurer who is also viewed as an outsider. She introduces them to the Portorosso Cup, an “epic, grueling, traditional Italian triathlon,” where the prize money, in the boys’ minds, spells a Vespa. They decide to form a team called “The Underdogs” to compete in the cup’s three challenges: Swimming, cycling, and eating pasta. It doesn’t go smoothly as you can imagine because a) if they swim they’ll transform back into their scaly selves b) they don’t know how to ride a bike c) have never eaten pasta in their lives. But this is Giulia’s opportunity to teach them everything she knows, and along the way, the three get into plenty of high jinks and it’s only a matter of time before Luca and Alberto get caught with a splash.

While the narrative may not be as innovative as other Pixar films, it’s in top form in terms of animation. Playful and rich in detail, the Italian Riveria is a bright, lush, multi-colored feast for the eyes. It perfectly incorporates what the region is known for – rugged cliffs, pastel seaside towns like the Cinque Terre fishing villages, beaches, and luscious greenery. The 1950s setting is also in the details, with posters of classic films like Roman Holiday hung around town and a brief glimpse of a black and white film playing on television. The character designs are so charming and cute, with the animators playing with bold shapes and proportions with each matching the characters perfectly. Luca’s shy, creative and curious nature can be seen in his more round features and big, astonished eyes. Likewise, Alberto’s much longer features and taller hair fit his boisterous personality and know-it-all attitude, while Giulia’s fiery red hair matches her equally fiery personality. Each of the three principal actors bring some excellent voice work to their characters to really allow their personalities to shine on screen. Tremblay captures Luca’s shyness and timidity, Grazer is able to balance both Alberto’s active personality and moments of emotional insecurity, and Luca has found a new star in Berman. She has so much infectious energy and brings such liveliness to her role.

As much as Luca is about friendship, it’s also about embracing the beauty of Earth’s many colors – the beauty of both its environment and its creatures. Pixar’s lastest may not be its strongest entry in terms of story, but it packs as much heart.

Happiest Season Review: Director Clea DuVall Makes History and the Yuletide Gay With the Best Rom-Com of the Year