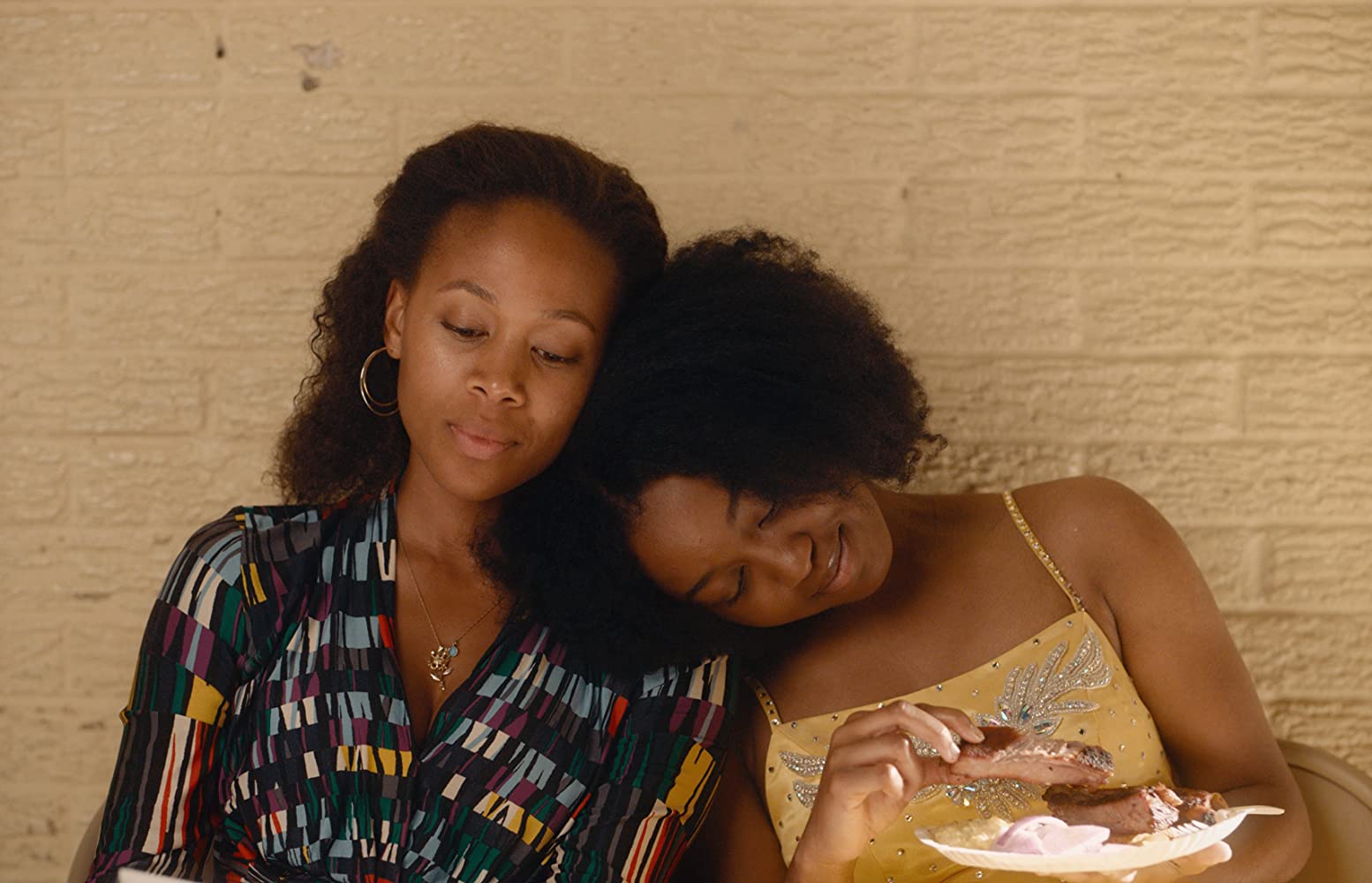 Written and directed by Channing Godfrey Peoples (Writer, Queen Sugar), Miss Juneteenth debuted at the 2020 Sundance Film Festival and I was lucky enough to attend the premiere. From its deeply complex performances to some of the beautifully lit imagery choices and the rich scenes that eloquently depict the struggles of Black womanhood & motherhood, Channing Godfrey Peoples delivers in her film directorial debut. Boldly introducing us to former pageant queen and single mother Turquoise Jones (Nicole Beharie, Sleepy Hollow) who is hoping that her 15-year-old daughter Kai, played by newcomer Alexis Chikaeze, will win the Miss Juneteenth crown that once bestowed her head and offered her a chance at life outside of Fort Worth, Texas.

When Jones leaves Prairie View A&M University early to return home to have and care for Kai, she sacrifices by any means necessary to make sure that Kai has all the opportunities she had and more. Kai sees her mom through the lens of being relentlessly hard on her and never quite catching a break in life, stifling her from becoming the woman she hopes to be. With rule after rule, Kai isn’t allowed to engage with boys or express her creativity through the dance team, as her mother believes that anything other than school will deter Kai from her bright future. Beharie and Chikaeze’s on-screen chemistry strikes the delicate balance of a mother-daughter relationship and a friendship. Beharie is quick to show that she is the adult, but there are pockets between them that clearly show a relationship where these two grew up together and still are growing together.

Kai’s father, Ronnie (Kendrick Sampson, Insecure) on the other hand, takes a much more relaxed approach in his rearing of Kai when he is around. While still legally married, Turquoise is well aware of Ronnie’s inability to consistently protect and provide in their lives, leaving her fiscally vulnerable with no choice but to work multiple jobs at Wayman’s Bar and the local funeral home. Oftentimes choosing between paying bills and Kai’s pageant fees, Turquoise is laser-focused on the potential of Kai winning a full scholarship to the HBCU of her choice, while also getting etiquette and cultural heritage lessons along the way. Ronnie mostly likely sees it as Turquoise attempting to live out her big dreams through their daughter. Kai is more drawn to Ronnie because he allows her the space to dream and pushes her to go after her heart’s desires. While Ronnie is seemingly always on Turquoise’s opposing side when it comes to parenting, he leaves no room for interpretation when it comes to his feelings for his estranged wife. The chemistry between Beharie and Sampson is easy and intimate, propelling you deep into the comfort of their history. While Ronnie is set on winning Turquoise’s heart, they both know that no matter how familiar they were in the past and comfortable they are in the present, Turquoise deserves a better future. Even Sampson’s earnest and persistent portrayal of Ronnie, won’t make you change your mind on that fact. Although Turquoise is used to Ronnie’s ever-growing list of disappointments, she often sweeps them under the rug, because she wants Kai to have a father in her life, but when Ronnie fails to make good on a promise to Kai, that is the beginning of the end of anything more romantic between them.

As the story continues to unfold and life gets more complicated, it becomes clearer why Turquoise is so strict yet, loving with her only child. Narrowly escaping Charlotte (Lori Hayes, Miss Firecracker), her alcoholic and overly religious mother, Turquoise refuses to parent like she was parented. Charlotte refuses to own up to her alcoholism and the impact it had on her daughter’s upbringing and subsequent choices, continuing a cycle of generational trauma. Turquoise albeit is determined to create a better life for Kai, to make sure that she is loved and respected in ways that her mother didn’t always show her. But in shielding Kai from her grandma and oftentimes her past, while well-intended, Turquoise doesn’t allow room for transparent conversations, that could help Kai circumvent any mistakes that her mother and grandmother made. Eventually, Turquoise finally begins to see Kai, and somewhere in the middle of learning from Kai and being reminded that she deserves to flourish within her passions, new passions arise for Turquoise herself. Amid a tragedy, she’s given a new opportunity and realizes that no amount of time can keep you from going after what you want in this lifetime.

Miss Juneteenth was a standout for me at Sundance, mostly because it was deeply personal. Godfrey Peoples wrote a story that uncannily reflected my own as a Texas-raised Black woman with a single mother who gave everything she had and more to invest in my education, my extracurricular activities, and my future, I saw bits of myself in Kai and lots of my mother in Turquoise. From an early age, my mother enrolled me in the best of the best organizations, making sure to provide me with a nuanced education, a rich cultural appreciation, etiquette classes, and yes even a debutante ball. While my mother often tried to guard me against the hardships that came along with her never-ending sacrifices, I would catch a glimpse of her triumphs and setbacks along the way.

While the pageant is the backdrop, Miss Juneteenth is so much more, with Beharie breathtakingly tackling the struggles of Black womanhood, motherhood, the complexities of partnership, and the hardships with trying to provide a better life one’s children. Through Beharie’s endearing performance, Turquoise finally comes to terms with the woman she used to be, the fallen expectations at the behest of her mother, and allowing her child to live in her truth. She breaks the cycle too often seen in Black families of parents living their unfulfilled dreams through their progeny. Turquoise embraces all of who she is and who she is yet to become, which in turn allows her to fully accept Kai and encourage her to do the same. She learns that no one in this world will love or take care of you, like you and sometimes it takes falling apart from the notions of what we thought we would be or have, to settle into the warmth of who we are, coming face to face with what we truly want and value for ourselves. So much of growing up as a Black Woman in Texas has defined and informed the choices I’ve made. I wouldn’t trade the experience of growing up there for anything and watching this film reinforced the immense pride that I already had. Yet even through pride-filled eyes, I also recognized that the pressures of becoming an exceptional Black woman can sometimes create a level of perfectionism that does not allow room for grace in making mistakes and carving out your own path. The crushing weight of the hopes and dreams of our mothers in parallel with their mourning when our imperfect steps mirror their own personal failures, make it hard to gain full self-acceptance. The generational impacts and realizations of loving your parents and your kids, but not knowing how to shed the heaviness of your parents’ assumptions for future, can trap you into a life you never manifested for yourself. Luckily, Turquoise eventually exuviates the sins of her mother, grapples the internal voice of fear and doubt by the horns, and dives into a new truth and life that uplifts her daughter and models an example for her to do the same.

Review: ‘The Outfit’ Is a Surprising Gangster Hit

One thought on ““Miss Juneteenth Authentically Tackles the Complexities, Expectations, and Sacrifices of Black Motherhood””