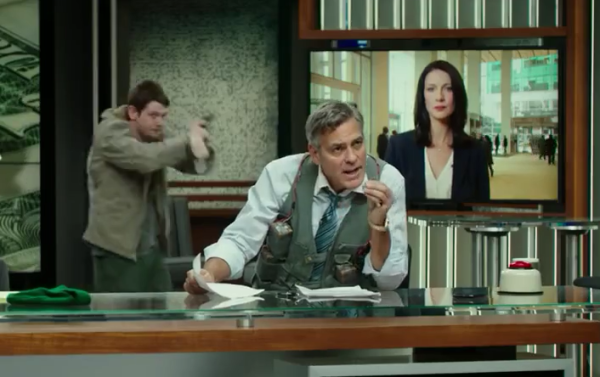 Money Monster is a financial television show hosted by Lee Gates (George Clooney) and produced by Patty Fenn (Julia Roberts). The movie starts off by introducing us to these characters and going through the dynamic tasks of how the show gets started. Patty has a tough job of directing the always unpredictable Lee Gates but the working chemistry between the two is great and she balances him out very well. It was refreshing to see Clooney have fun with this role and he even showed us a few of his dance moves in the process.  The fun is quickly halted however when a delivery man (Jack O’Connell) appears on camera and takes Lee Gates hostage.

O’Connell does an amazing job at portraying Kyle Budwell, a young man desperate for his $60,000 lost in an investment gone bad to a company called IBIS. It’s a far different character from the one he played in 2014’s Unbroken. He takes Lee Gates hostage and demands for him to uncover what happened to his money. Patty is then tasked with producing a live hostage situation on national television for the entire world to see. The dialogue between these three main characters adds to the suspense and drama of this movie that keeps you on the end of your seat to find out what happens next.

Overall, this movie is a mix of Inside Man and Big Short with a great balance of humor and drama.The cast delivers a powerful performance enough to keep you entertained until the very end. However, it makes you think about the corruption within Wall Street and might have you rethinking your investment options.

Have you seen Money Monster? Tell us your thoughts below!

TIFF Review: ‘The Forgiven’ Is a Hot Cast of Names in an Average Drama