Skip to content
You are here
Home > About > Safety Review: A Heartwarming Tale of Brotherly Love 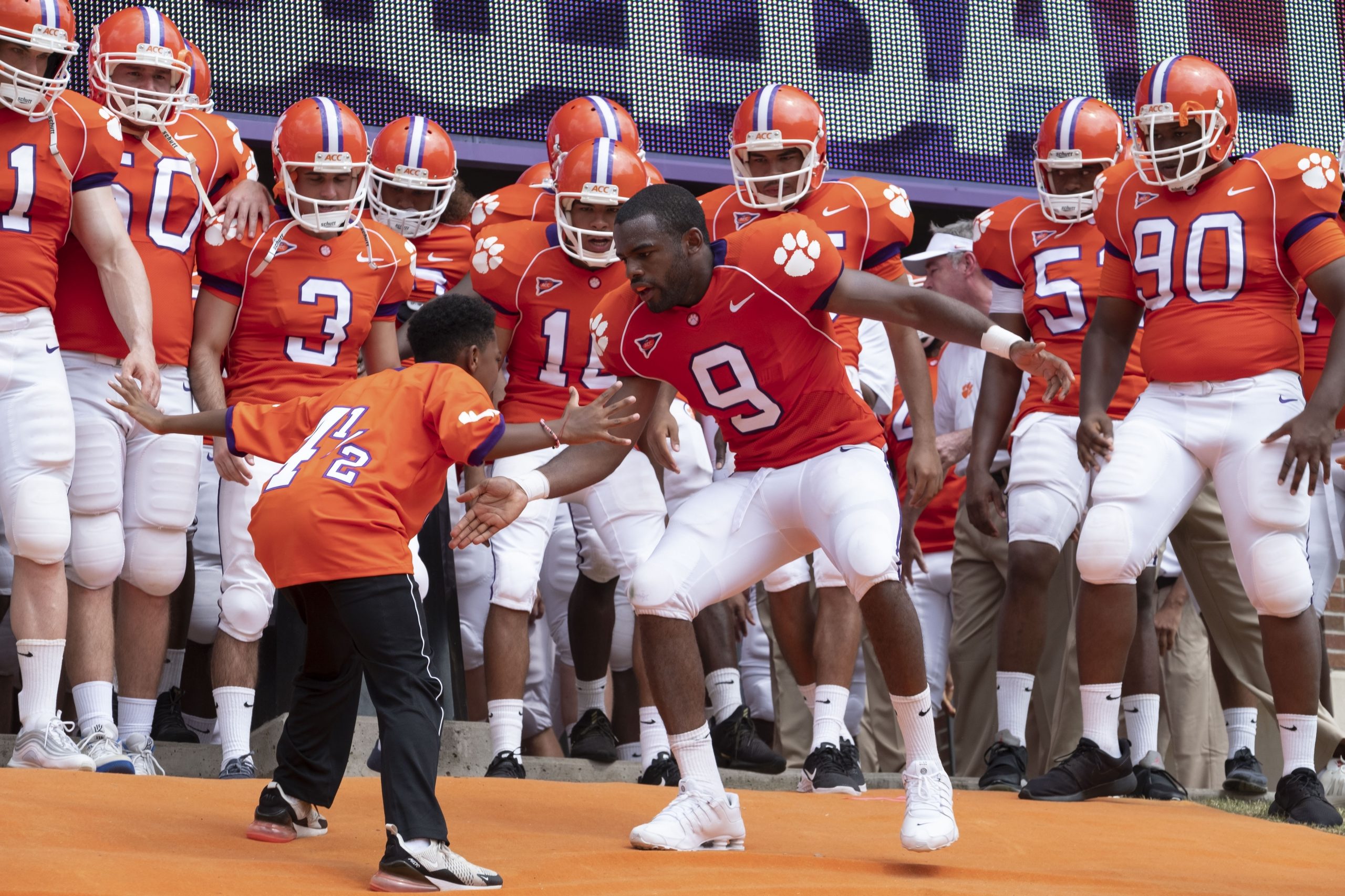 Ray Ray McElrathbey (Jay Reeves) believes he’s made it. And who can blame him? He’s a red-shirt freshman playing safety for the Clemson Tigers football team. He has a dorm, is acing his classes, and is standing out in practice. But his dream comes under threat when his mother is admitted to rehab on charges of drug possession, leaving his younger brother Fahmarr (Thaddeus J. Mixson) without anyone to care for him. Rather than allow his brother to fall into foster care, Ray Ray volunteers to be his guardian and hides him in his dorm. It’s a risk. Because if Ray Ray is caught with Fahmarr, not only will his younger brother be taken away, so will his scholarship. It’s an impossible situation, one that’s edified in Reginald Hudlin’s Disney+ sports melodrama “Safety.” An uplifting film that, while flawed, is emotionally tangible.

“Safety,” however, emotionally starts off rocky. The film’s romantic arc between Ray Ray and Kaycee, a girl working at the school textbook store, isn’t believable at all. For one, Kaycee is supposed to be a sports nut, but Foxx’s line deliveries are so wooden, it’s as though she read them right before Hudlin rolled cameras. Moreover, Reeves and Foxx have zero chemistry due to the latter’s flavorless performance. Reeves fairs far better when he expresses the weight Ray Ray is bearing alone. See, not only does Ray Ray have to take care of his brother by getting him ready for school, but he’s also shouldering 18 credit hours and weeks of ruthless practices. Though he has the help of his full-blown Italian roommate Daniel (Hunter Sansone), along with a few other teammates, the balance is untenable. His grades begin to slip. His performances during practice become unwatchable. And his relationship with Kaycee withers. Reeves expresses this burden through fits of anger and weariness that grip his muscular frame.

The script, written by Randy McKinnon and Nick Santora, sands over much of the conflict before it even develops. There’s the rivalry between the senior captain Keller (Miles Burris) and Ray Ray due to the former treating freshmen as indentured servants. There are the assistant coaches who, without knowing his circumstances, regale Ray Ray for his lack of effort. And even after they do discover Ray Ray’s secret they are no less forgiving. To them, the young man put the program at risk for NCAA sanctions. The assistant coaches don’t see Ray Ray as a person. He’s a commodity. His only value comes by way of his football skills. Coaches Simmons (James Badge Dale) and Bowden (Matthew Glave) aren’t much help either. They have to be badgered into assisting their young player. Nonetheless, all of these tensions are quickly resolved. There are no true bad guys in “Safety.” Everyone is simplified. And ultimately shown to have the best intentions. That’s the melodrama’s biggest problem.

Even so, the inherently feel-good story of Ray Ray and Fahmarr is the bandage that covers the narrative’s gaping wounds. When the football team rallies around the resilient brothers, the pair finally flourish as individuals. Fahmarr becomes infatuated with a girl at his grammar school and Ray Ray’s grades and football play bounce back, too. One of the movie’s visually stunning scenes finds Ray Ray playing his first game against FAU. Hudlin and cinematographer Shane Hurlbut utilize mounted POV shots to immerse us in the field of play. We are Ray Ray running to tackle his man. We are him as he celebrates. And I wish there were more football scenes like that.

His celebration, however, is short-lived because it soon comes to the school’s intentions that Ray Ray might have committed NCAA rules violations by accepting charity, such as food and car rides, from the Clemson community. It’s a stinging blow for a young man who prides himself on not asking for help, a habit he desperately tries to break as a community rallies around him. To keep his brother and his football career, Ray Ray decides to make an appeal to the NCAA so they might waive their rules for him.

McKinnon and Santora’s script doesn’t provide a sufficient examination of the root issue: The NCAA’s stringent rules against paying student-athletes. If student-athletes were paid then Ray Ray wouldn’t need to skulk around with his brother. He wouldn’t need to hide him. His scholarship would not be in jeopardy. And he would not have to go before the NCAA board so that he might keep his football career and his brother. In short, he would not have been put in an impossible situation, to begin with. Student-athletes still aren’t being paid. And considering how many are now are playing games during a pandemic, the issue is at its most glaring.

“Safety” could do with a wider scope with regards to questioning NCAA practices. It could have better acting and less melodramatic. But the story of Ray and Fahmarr McElrathbey is just as inspiring today as it was in 2006. Even with its clear weaknesses, “Safety” is an uplifting film about the unbreakable bonds in communities and teams, and between brothers.

TIFF Review: ‘Holy Spider’ Is a Tough Watch but Impactfully Haunting and Relevant

One thought on “Safety Review: A Heartwarming Tale of Brotherly Love”