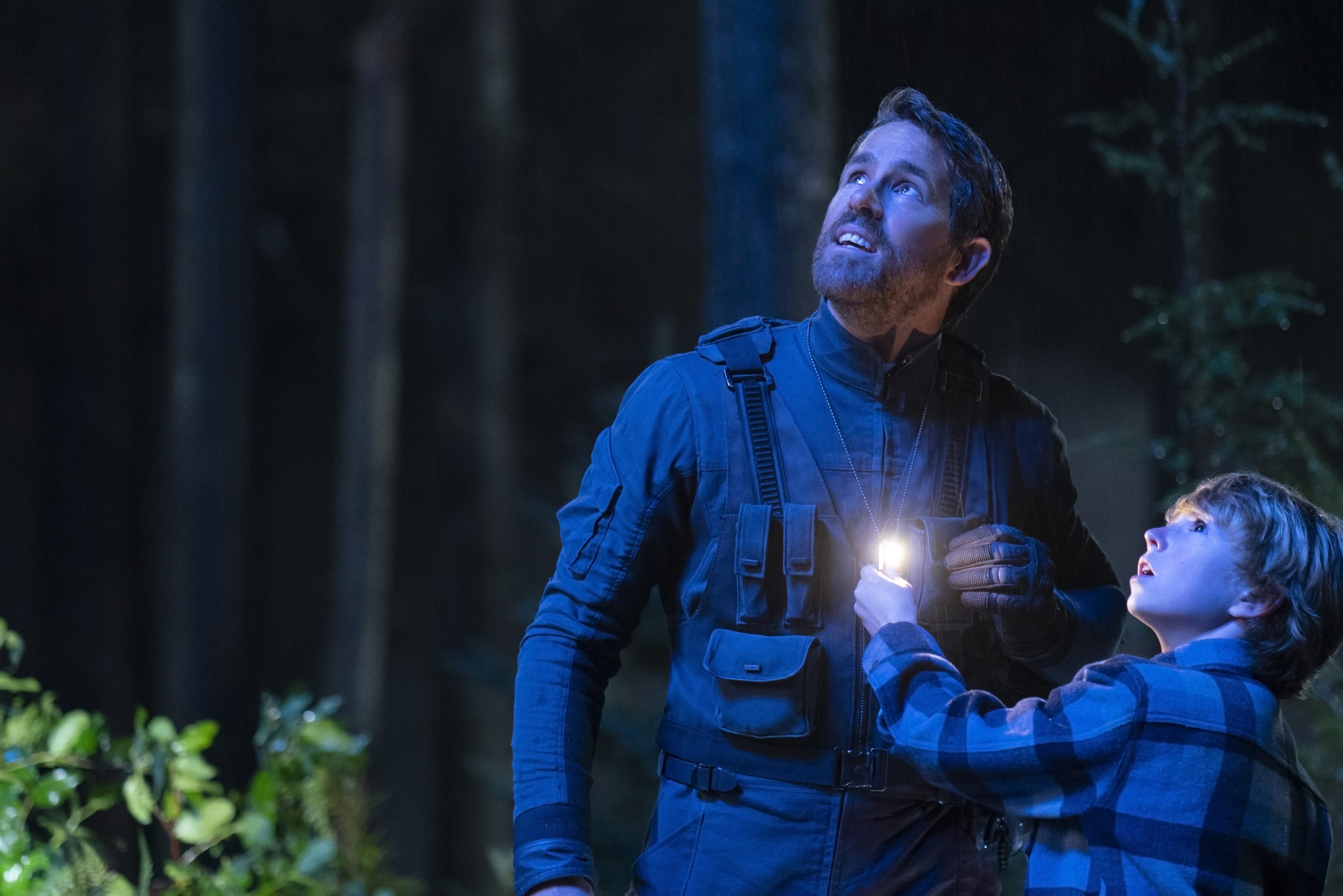 Knowing, Super 8, Zathura, E.T., The Last Mimzy. These are all sci-fi titles I loved as a child. Sure, some of them are probably not that good. I don’t remember them well, admittedly, but what I do remember is watching them all with my mom. Witnessing a narrative about something unimaginable not only found me in absolute wonder but also joy because I was watching it as a family. Shawn Levy’s The Adam Project brings that feeling back with a film that sucks you in like a time machine and sends you back to those childhood family movie nights. Since the plot centers around the creation of time travel itself, it’s a fitting effect to create. But it’s more than that. Writers Jonathan Tropper, T.S. Nowlin, Jennifer Flackett, and Mark Levin have not only crafted a highly entertaining film but one that delivers profound messages to adults and children alike. The conversations and experiences of the characters not only explore the difficulties of making peace with the past but also explore how difficult it is to grow up consumed by grief.

There’s no better way to introduce the mood you want to evoke with a film than its intro song. For The Adam Project, it’s The Spencer Davis Group’s “Gimme Some Lovin’,” which accompanies our protagonist, Adam (Ryan Reynolds), in a high-flying and high-energy firefight in space between himself and another jet. The year is 2050, and the skilled pilot stole a jet to travel back in time to search for his wife, Laura (Zoe Saldaña). Propelling himself into a wormhole like the Millenium Falcon jumping into hyperspace, he lands in 2022 where his 12-year-old self and his loudmouth are busy instigating fights in school. Adam (Walker Scobell) at this stage in life is grieving over the loss of his scientist father, Louis (Mark Ruffalo). It’s easy to understand how his actions are a projection of what he’s going through. He’s a jerk, especially to his mom, Ellie (Jennifer Garner), who’s struggling with her grief as much as he is. All she can do is try her best and remind him that his actions have consequences and that he better start caring about his future because it will come sooner than he thinks. But she couldn’t predict it would arrive on their doorstep so quickly.

While home alone one night, he hears a clattering sound in his dad’s garage and finds an injured man. Young Adam is quick to learn that he’s interacting with who he refers to as his “middle-aged” self, and it both requires a helping hand from fainting and a puff of his inhaler. Adult Adam reveals that his actions have left him on the run from a woman named Sorian and her supersoldiers. Maya Sorian (Catherine Keener) is a scientist who has been tampering with time, causing the world to fall apart. Teaming up with his younger self, Adam is determined, not only to find his wife but to save the world before it’s too late. However, with sacrifices to be made and many uncertainties ahead, Adam is unsure if he’ll come out of it unscathed.

The biggest achievement for The Adam Project is how it manages to balance child and adult humor, making it an enjoyable journey for all ages. This has a lot to do with Reynolds and Scobell, one of the best pairings of the year. With Reynolds, you immediately know the wit to expect, but from the moment Scobell says his first line, he feels like the perfect complement to the star. They both have the same charm and natural comedic energy, and their back and forth banter is the main reason why the film is so entertaining. When Ruffalo comes to the scene, he adds even more fun exchanges. However, Garner and Saldaña are sidelined in comparison, with their stories simply being defined by what they mean to the men in their lives. (Saldaña does have a kick-ass introduction, though.)

The film also excels at bringing familiar elements of the sci-fi genre and making it its own, like the designs of space ships or the weapons used. They’re different enough to separate them from any influences, but also help kids find something to identify them with for added excitement, like young Adam pointing out that one sword-like weapon is a lightsaber. The CGI can be rough, like in the obvious deep fake of a younger Sorian, and some concepts like wormholes will go completely over kids’ heads. But just as its comedy, the action also strikes the right balance of not being too violent but also keeping an adult audience engaged. However, the ending to the film’s main conflict ends up feeling a bit too PG, leaning into the comical territory, and we never get a sense of how high the stakes truly are. We are told that the world has been falling apart because of time travel, but we never get to see how Sorian’s tampering affected the world and those in it.

We have all thought about or were asked if we could think of one thing we would tell our younger selves. The Adam Project shows what that could be like. Perhaps Adam is tampering with the past more than he should, but it’s heartwarming to see him reflect on regrets and try to correct things like showing his mom the love he failed to reciprocate. He’s angry at his father, he admits, but in a great little monologue by Scobell, young Adam helps older Adam remember how his dad really was. This exchange carries greater weight and significance when you consider that Reynolds is bringing his own grief and reflection to these scenes, having lost his father in 2015 to a nearly 20-year-long battle with Parkinson’s. Both Adams are going through grief together at different stages in their life, and when the cloud hanging over them finally disappears, they can walk the path to healing and forgiveness.

We all have lingering questions, those “what ifs,” and feelings that are difficult to deal with after the passing of a loved one. We may never be able to get answers or be able to heal quickly, but as Levy’s film demonstrates, peace finds us all in the end.

Eurovision Song Contest: The Story of Fire Saga Review: A Movie That’s Best When It Reminds Us Of How Weird, Campy And Heartfelt The Real Eurovision Is