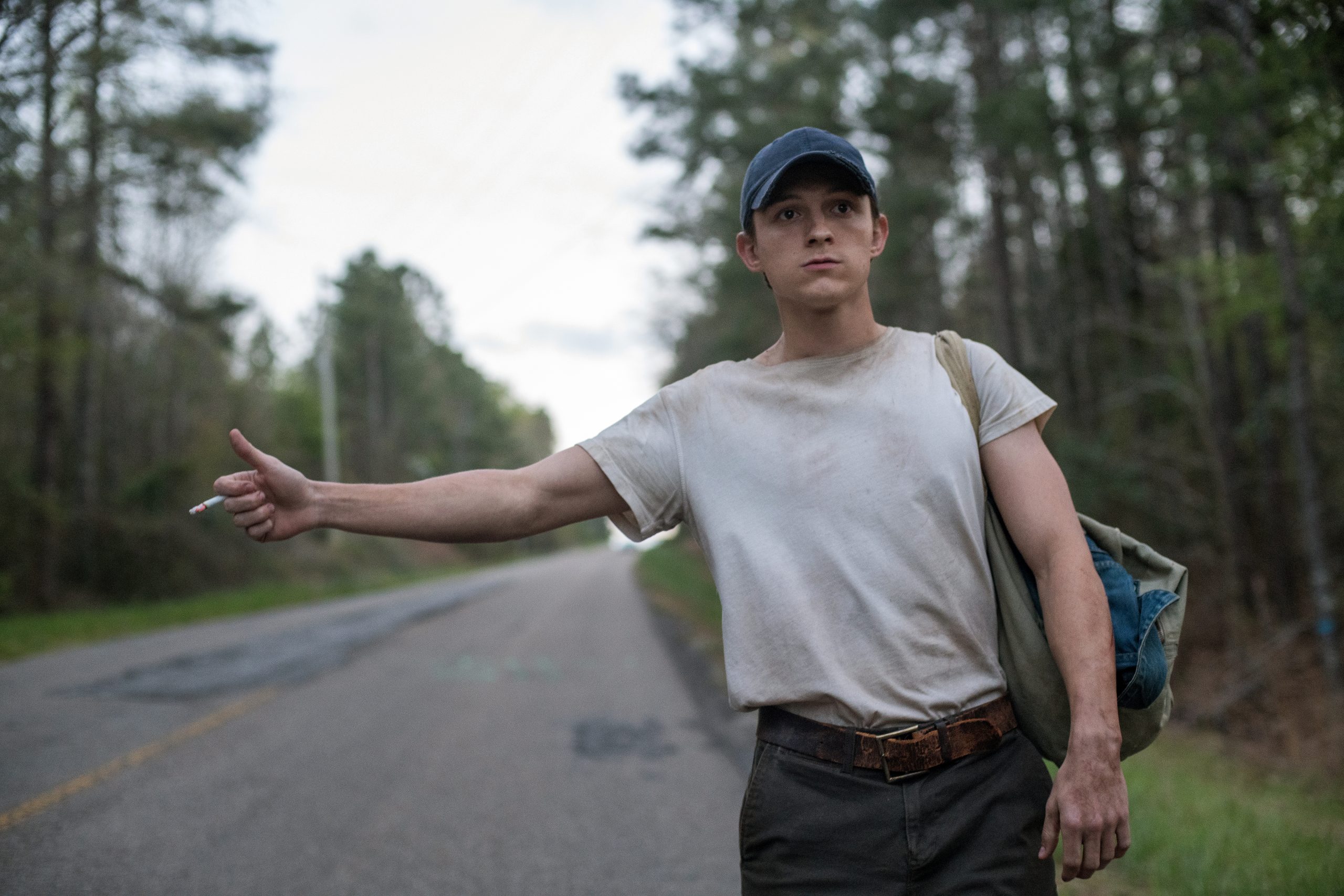 “There’s a lot of no good sons of bitches out there,” and The Devil All the Time has many. Based on the novel of the same name by Donald Ray Pollock – who provides insightful and contemplative narration –  the film begins with a map filling the screen that links postwar backwoods towns in Ohio and West Virginia. Despite the 10-hour drive between them, they’re closely linked. The characters who live there are connected, their lives intercepting either directly or indirectly throughout the film. In small towns, it’s no surprise to find everyone has blood ties. While some characters are bound by blood that’s inherited, Antonio Campos’ film is filled with a sizeable cast bound by blood that’s also spilled. Both the director and co-writer, Paulo Campos, craft an engrossing film, one that’s lived in with a depiction of 1950s and 1960s white America that feels familiar, and compelling in the way it questions if there’s such a thing as a good Christian. But while it details the violence of religious men and how violence can be generational, it does so in a laborious way.

In this explosive midwestern tale, everyone is fighting with the devil all the time. None more so than Arvin. He’s the character at the film’s center, and his life is followed from infancy to coming of age. His father, Willard (Bill Skarsgård), is a war vet who struggles with his faith as the darkness of war haunts him. His mother, Charlotte, is a sweet, devoted housewife with the gentle demeanor that Haley Bennett gives off naturally. Willard is overbearing to his young son who grows up witnessing his father’s rage and bloodied knuckles. The best day that Arvin can remember spending with his dad is one that began in violence. Then in desperation, Willard finds God again. Praying every morning and every night in front of a makeshift cross in the woods behind their home. In these moments, the narrative explores the mistaken belief that to be close to God you must commit immoral acts. Arvin’s childhood scars him, and Michael Banks Repeta makes an impact, carrying the dismayed look of a child who witnesses things one never should. Eventually, Arvin moves in with his grandmother Emma (Kristin Griffith), Uncle Earskell (David Atkinson), and Lenora. Introduced as his step-sister, Lenora is the daughter of Helen (Mia Wasikowska) – a good, church-going girl that Emma had hoped her son Willard would marry – and Reverand Laferty. Harry Melling makes an impact in his few scenes in the ‘50s timeline of the film. There’s no doubt that he’ll always be associated with his role as the spoiled cousin of The Boy Who Lived, and it’s unfortunate to see him in supporting roles time and time again. He proves here that he has the talent to be knighted as a British great. He’s quite frightening as he preaches with fiery conviction to his devoted parishioners. (He sings, too!). Following this timeline is one that takes place in the mid-’60s, beginning with Arvin’s birthday. When he comes of age, he’s gifted with his father’s gun. A gift that’s not only met with apprehension but marks the beginning of violence coming full circle.

We’ve never seen Tom Holland deliver a performance quite like this before. The role of Arvin allows him to showcase his range at full potential, and in brutal ways. Arvin’s father lives in him, and Holland makes sure to emulate what Skarsgård did with Willard through his words, mannerisms, and actions. (Like father, like son, as the saying goes.) A black eye has been a constant accessory, and as Arvin gets older, the rage on his face and his bloodied knuckles are all too familiar. The closest person he has to a friend is Lenora, and he takes the protective big brother role seriously. As Lenora, Eliza Scanlen doesn’t have much do with the material given in comparison to her latest role in Babyteeth or even Little Women. When a new preacher comes to town, everything goes to hell – Arvin must fight the devil this time. The town is quick to fall under Rev. Teagardin’s spell, but Arvin sees him for the dishonest, amoral man he is. Robert Pattinson brings a character to life that makes you question if there are any good Christians. His stylish exterior hides a sleazy, manipulative and predatory man. As you can expect, one of the best parts of the film, just like the trailer, is Pattinson exclaiming, “Delusions!”

The third act is the film’s strongest and most explosive as everything comes full circle, delivering a climactic, violent showdown between the film’s two standouts: Holland and Pattinson. It’s also marked by a suspenseful run-in between Arvin and two other characters shown throughout the film: Stacy and Carl. They make a very odd pair, but carry a joie de vivre air about them. They’re the murderous version of Bonnie and Clyde, picking up cute looking hitchhikers and using them as “models” for Carl’s photography. There’s nothing really memorable about Jason Clarke’s performance, but Riley Keough is hypnotic as always. She has a look that could fit in any era, embodying that Betty Grable pin-up girl image while also getting to play with her emotional range too as the couple’s immoral acts begin to harm her psyche.

The Devil All the Time is a gruesome tale with haunting imagery, but it feels congested and never really finds its rhythm until the third act as the storylines of major characters converge. The narrative has choppy execution and dividing it into sections with a more linear timeline would have benefited as, despite text indicators, it’s easy to forget what year it is. It flashes back and forth with a lot of subplots introduced and cut early to explore something else, but then, we find ourselves back to previously introduced moments that are replayed and then expanded. With so much going on and so many characters, the film’s editing makes it an arduous watch. Some characters are more memorable than others, but one, in particular, could have had his entire scenes cut out. Sebastian Stan delivers a good performance, but his role as Lee amounts to nothing more than a sheriff obsessed with re-election. Sure, he has a connection to major characters, but without him, their stories would have been the same.

It’s perhaps a tale better immersed on paper as it’s divided into clear sections. But technical elements, like the focus on hymns rather than score, help us feel that emphasis on religion and certain characters’ desperation to feel the presence of God. Ultimately, The Devil All the Time challenges the hypocrisy that closeness to God leaves one exempt from sin, but many are no better than those they call heathens.