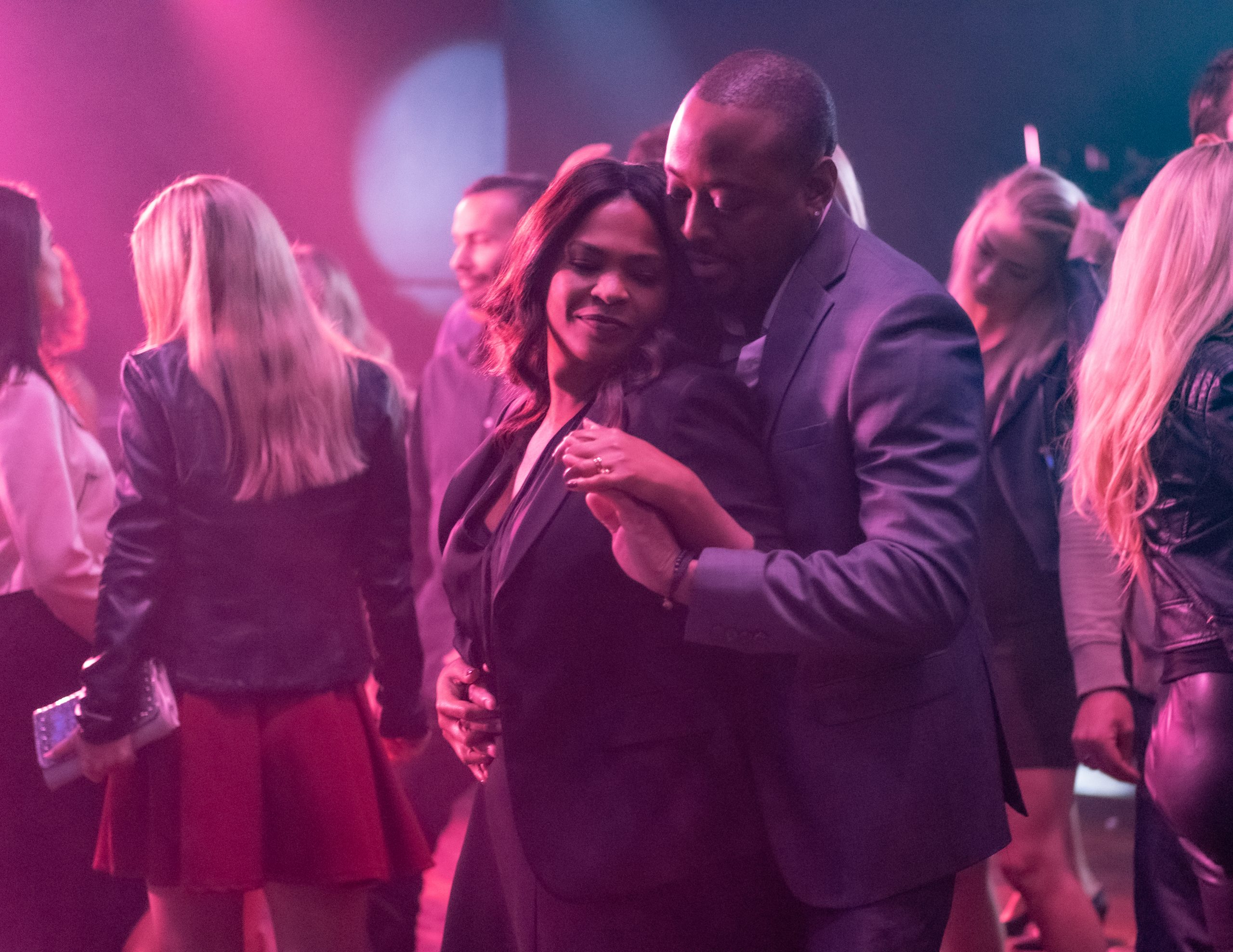 Fatal Affair is the story of a torrid make-out session and an almost sexual encounter turned deadly obsession. A thriller that follows brilliant and successful lawyer Ellie Warren (Nia Long, Love Jones), and her architect husband Marcus (Stephen Bishop, Being Mary Jane), who has just moved from San Francisco to Oceancrest, following his recovery from an accident. With their daughter Brittany (Aubrey Cleland, Lethal Weapon) away at college, this feels like the beachfront forever retirement home that they always dreamed of, the perfect place for peace of mind and a fresh start. In Oceancrest, Ellie and Marcus look forward to the newest chapters in their lives, with Marcus joining a new architecture firm and Ellie starting her new law firm, finally taking control of her clients and hours. After one final case at her big firm in the city and Ellie will be free. That is until her firm decides to hire a new IT consultant David (Omar Epps, Love & Basketball), for the said final case, and that is how their story unfolds.

David and Ellie go back twenty years, college friends who lost touch after graduation. Ellie is surprised but thrilled to reconnect at first. When David asks Ellie several times to catch up one on one, Ellie passes due to scheduling conflicts. Eventually, she decides to invite him to happy hour with her and her friend, Courtney (Maya Stojan, Castle), thinking there is no harm in having him join a group outing. When Courtney predictably cancels due to a work emergency, David & Ellie are left alone. He pries into her home life, looking for any sign of unhappiness and Ellie falls right into that trap. She confides in him about “not so perfect times” with her husband and saying sometimes she feels as though she doesn’t the person sleeping next to her anymore. David takes this and leans into it, fueling his obsession for her that likely started in college. Ellie, flattered when David tells her that he knew she worked at the firm and that’s why he took the consulting job, ignores that first and well-placed red flag. After dancing at a club, they get caught up in the bathroom, and Ellie stops them just before they have sex. After this, David’s behavior becomes erratic, compulsive, and just plain over the top. Doing everything from strategically dating Courtney to get close to Ellie and befriending Marcus, David truly knows no bounds. With his instability teetering a very fine line, he believes that his grand gestures and obsessive behavioral patterns will be met with success, bringing him and Ellie closer together. Never learning that the way to a woman’s heart should never involve stalking or ignoring her requests for unwanted attention.

Time passes, Ellie blocks David and moves on with her life. Never confiding in Marcus about that night or the subsequent stalking thereafter, Ellie tries to enjoy every moment with her family by reconnecting with her husband and doting on their daughter, home for Fall Break. She revels in her new and less stressful client load at work, and the serene beachfront property that they live in. Thinking David finally got the hint, his delusions o father fate only grow stronger, with him lurking in her house while she’s asleep or sending her video footage of their night at the club from an unknown number. When his relationship with Courtney becomes public to Ellie, it is in the form of an unexpected double dinner date at her house. Shocked and terrified, Ellie confronts him, but still not fully grasping the magnitude in which he believes that they are meant to be. So much for him listening, because after showing up to her home, he gifts her a vinyl record of a song they used to listen to in college.

Setting more “traps” in his favor, he begins to isolate Ellie and Courtney. “Confiding” in Courtney about the affair that Ellie initiated and wanted to have but that he couldn’t go through with, Courtney chooses believes the man she’s known for a couple of months, over her friend. Courtney ends that friendship based on Ellie’s betrayal, when the reality is, Courtney is the one at fault for not trusting and believing her actual friend, shutting her out without even allowing her to speak the truth.

Ellie doesn’t give up on her search for the truth about David and starts to do some digging of her own. She goes back to a mutual friend from college, Nicole (Kym Jackson, NCIS) who has maintained a much closer to David over the years. Nicole informs Ellie that David’s ex-wife, Deborah (Kj Smith, Sistas) was murdered. The cops suspected David but ultimately ruled it a home invasion targeted after Deborah’s new drug-dealing boyfriend. When Nicole comments that Deborah looks just like Ellie (for the record, I do not believe this to be true), Ellie finally starts to suspect more. She goes to his apartment, hacks into his computer, and the more information she finds, the more concerned about Courtney she becomes. When she finally gets Courtney to listen, it’s too late. When Courtney is attacked, it forces Ellie to confess to her husband and daughter. David, always being 20 steps ahead, stages his suicide, goes on an apology tour and the Warren family breathes a sigh of relief for their new freedom. But why would David confess to the murder of his ex-wife and her lover now? Why would take his own life now? He hasn’t gotten what he wanted, and this is completely out of character for someone we’ve watched over the last hour prove himself to be wildly relentless. If he did commit suicide, why wasn’t there an autopsy or dental records to confirm? These very obvious things were never done because we need the final act. We need the climax of Ellie and David going head to head one final time, all in the name of David’s unrequited love. It’s obvious what happens next after a tense struggle, but I am so glad that Ellie & Marcus, finally get their fresh start after the hell that they go through. Of course, they have to move back to the city to find it, but at least David is finally out of the picture, right?

Fatal Affair was almost exactly the familiar story I expected it to be. Admittedly, I watched this movie for Nia & Omar, for their legacy and the art that they’ve created over the past 20+ years, which includes some of my all-time favorite films. While I relished in the opportunity to see these Black actors that I have grown up with and admire in something new, it still didn’t fully sustain the overall writing. Giving the best performances they could given the content that they were provided, the glaring plot holes and predictable twists and turns depended too heavily on the backs of these actors. While I had hoped for a bit more mystery, intrigue, and suspense in the writing, I often ended up foreseeing most of what would happen onscreen, before it occurred. Perhaps a twist could’ve been the reveal that David was stalking the family for months, and was the one behind Marcus’s accident. Maybe Nicole warns David about Ellie’s prying, since they were closer friends, adding a bit more stakes to the drama. I am always rooting for them, for us, and am looking forward to the ways we continue to push barriers as Black creatives in the suspense thriller genre, boldly tackling scripts that are incalculable, complex, nuanced, and original. I want to see more content like this, I want us to all watch as a family and lean into this particular film for all that is. Because when we support Black art, we create opportunities for growth and expansion, and we always need more Black art. Also, a question that remains for me is what happened to Scott (Jacob Aaron Gaines, Dimensional Shift)? Brittany’s high school friend turned boyfriend, was left abruptly on that porch, while the Warren family fled for their lives. It seemed to me that he was just badly injured and in fact, not dead. So, why couldn’t they have freed him and sent him in the getaway car with Brittany?

Even with the ending and my not necessarily believing that David is completely out of the picture (Where is the body? Didn’t we learn last time to verify?), I did well up with pride and joy seeing my Black faves onscreen in roles I’ve never seen them in before. While I am always rooting for them, and for us, I’m also looking for new Black tv shows & films that continue to push barriers in the suspense thriller genre, boldly tackling scripts that are incalculable, complex, nuanced, and original. While this one didn’t exceed my expectations, I still desire to see more content like this. When we support Black art, we make space and create room for new opportunities with expanded scripts and bolder risks, and we need more of that. So, let’s all watch this film as a family, leaning into all it is and all we wanted it to be, the good, bad, and the questionable. Check out Fatal Affair, currently streaming on Netflix!

‘My Hero Academia: Heroes Rising’ Encapsulates Everything That Makes The Anime Great, And Everything Bad With Movies Based On Anime Shows [Review]

One thought on “Fatal Affair Review: Gives Us Hollywood Royalty Without Unconventional Twists”