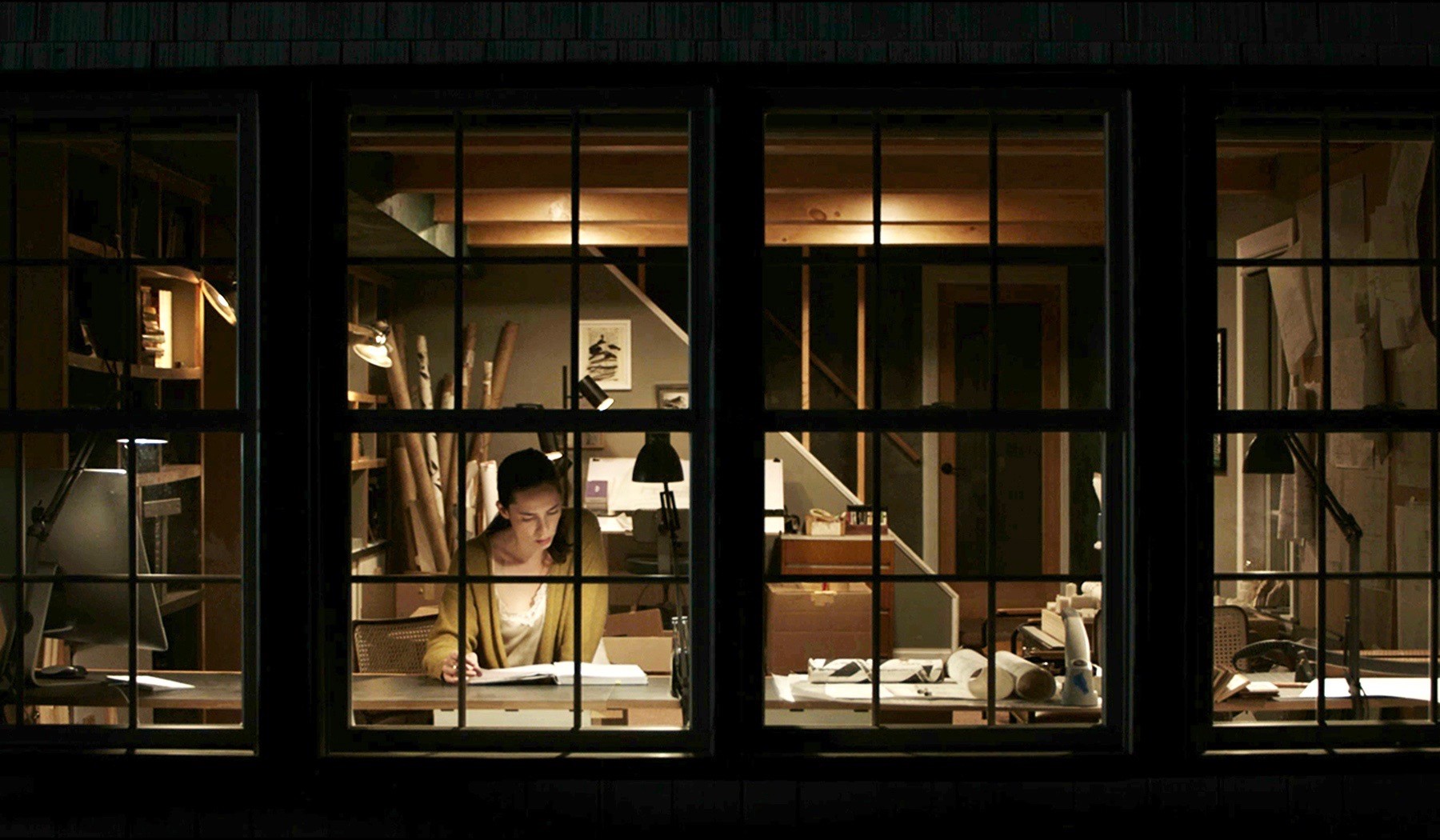 There’s no better way to describe The Night House than with this quote by director David Bruckner: “As I sought to order the conflicts and the metaphors, dig into the mechanics of the story and what my responsibilities would be as a director, I continually got lost in the subterranean regions of the narrative, which was as confounding as it was exciting.” Written by Ben Collins and Luke Piotrowski, The Night House truly is as confounding as it is exciting. A labyrinth of mystery and the supernatural, it’s a viewing experience that consumes. As the voyeur, the audience becomes desperate to understand every inch of its narrative, just as the film’s mourning widow is desperate to understand the ghostly presence in her house and uncover her husband’s disturbing secrets. Beth (Rebecca Hall) is determined to unravel a mystery, and we are determined to break apart every inch of this darkened hollow of four walls. It’s a gripping and unsettling ghost story that leaves space for much interpretation. We all mourn differently, so the possibilities are endless narratively for films that explore the subject of grief, and the filmmakers play with this in a twisted, technically wonderous mind game.

The score and production design are quick to establish the film’s sullen tone. Slow piano keys fill the background as the camera pans over crumpled tissue scattered on the bedside and framed photos of a handsome-looking man and happy couple. Then, Beth enters wearing black. For a film set to explore grief, the feelings of loss and mourning don’t wait long for their introduction. Beth is now a widow after her husband Owen’s (Evan Jonigkeit) recent suicide. To lose someone unexpectedly and without answers is traumatic, and Beth seems constantly lost in thought. So much so that she loses track of time, or she’ll just close her eyes for what feels like few seconds but time has sped up hours. She’ll fall asleep and wake up somewhere else, and she has very vivid and disturbing dreams. You can’t tell what’s real and what’s not at times because it’s played out like an out-of-body experience. Most of what we see of her takes place at night. She can be seen drinking, watching weddings videos, and eating leftover pasta. She toses and turns, looking longingly at the empty space next to her. During the few moments in daylight, we learn that she’s a teacher. She wants to get back to work to try to take her mind off things, but that doesn’t last long as the presence of something supernatural in her home consumes her every waking moment.

Messages from the beyond, disembodied voices, and haunting imagery all suggest to Beth that she’s in contact with her husband’s spirit. But is he really there? Or is it a trick being played by her mind in an attempt to feel Owen near again? What is haunting Beth is kept in the dark for most of the film, helping to keep the audience’s intrigue. But that isn’t a difficult task as mysteries about Owen begin to unravel. That popular still used for the film, the one that shows Hall as Beth sitting inside her home as the audience acts as a Hitchcockian voyeur into her world, is the moment where everything she thought she ever knew begins to fall apart. Using references to Welsh mythology, Beth discovers that her husband built the house under a Winchester Mystery House-esque state of paranoia. And as more secrets are revealed, she begins to wonder if she was living with a crazy person and didn’t know it. In her obsession with Owen’s secret life and desperation to understand it, the audience begins to feel that way too. And as she achieves a clear vision of his violent and suffocating secrets, we are right on the edge with her. Owen built a house to try to run from his demons, but instead, he left Beth to confront them.

As sharp and captivating as its script may be, it’s everything from the imagery and score that especially makes The Night House a frightening experience. Whether it be the Welsh mythology and Egyptian voodoo symbolism to the Hitchcocking influences in the use of voyeurism, the exploration of dreams, and the presence of malevolent forces, all of this helps build the foundation of this labyrinth of a picture. What DP Elisha Christian and the special effects team do here to give life to this paranormal force on screen is a wonder to witness. Using optical illusions like Rubin’s Vase, they make use of negative space and everything from columns to doors to even water to give off the impression that there’s a shadowy figure standing in front of Beth. With subtle manipulations of this space, it allows the audience to get a sense of Beth’s state of mind; when we think we see something in the dark, but it’s just our eyes playing tricks – but this time the trick is real. The booming sound work only elevates this anxiety. The filmmakers also think outside the box in terms of filming the past and present. Here, there are no flashbacks. Instead, the past and present intersect in the same frame as though Beth is seeing a parallel universe.

The Night House is the Rebecca Hall show, and she proves once again that she’s a force on screen. Through her performance, you can feel all of Beth’s fear, and she has no problem laying all her emotions out on the table. It’s a performance that’s heartwrenching as you follow a woman adrift and heartbroken. Hall doesn’t speak until about 11 minutes into the film, and when she does, it results in one of the film’s best scenes: A conversation between her and a student’s mother, complaining about her son’s grade, turns humorous and praise-worthy – for both dialogue and performance – as Hall unleashes an intimidating and confrontational side to Beth, one where she makes any issue seem trivial in the face of her own. Hall internalizes all aspects of Beth’s psyche, and whether dream or reality, you absorb all her affections and have her desire to put every last puzzle piece in its place.

In a game – a film – that discusses the tricking of death, The Night House displays remarkable tricks of its own. With many gasp-worthy moments throughout, it’s a horror film of the best kind – one that brings its own genius while playing with familiar staples and tropes. A suspenseful ending brings everything full circle, with few questions still lingering. The most stressful last few minutes of any film this year leaves you out of breath. And as the blood moon soaks the scene with its crimson glow, you’re afraid to look – but can’t look away.