Skip to content
You are here
Home > Movie Reviews > TIFF Review: ‘The Forgiven’ Is a Hot Cast of Names in an Average Drama 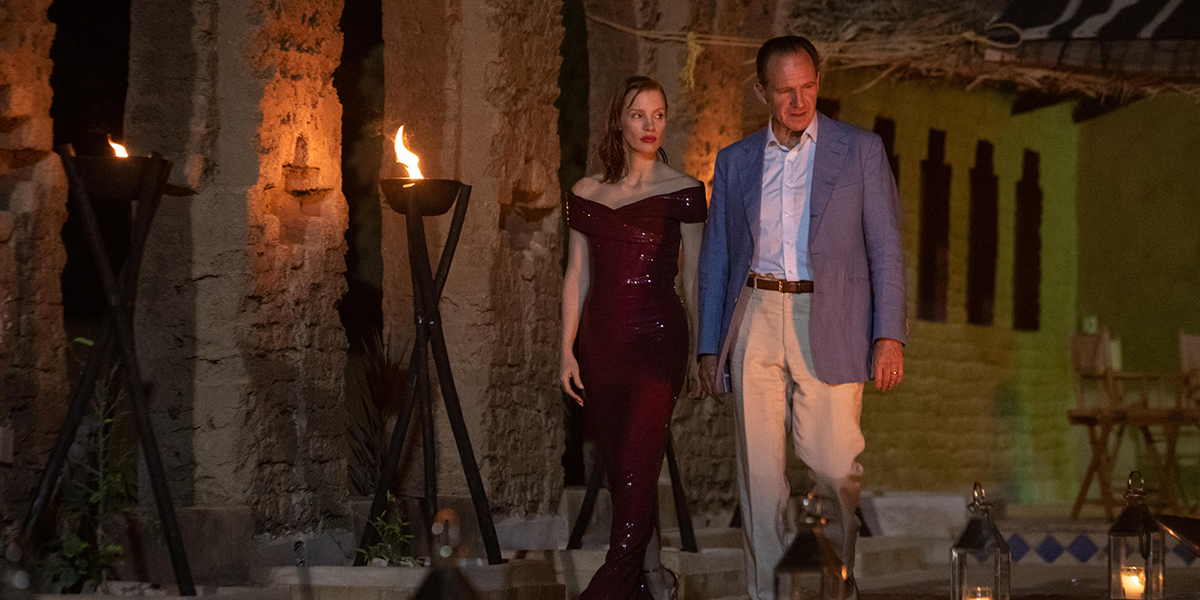 A party at a castle in the Moroccan desert brings together rich snobs in writer-director John Michael McDonagh’s The Forgiven. The “rich white people doing bad things” narrative is becoming a genre in and of itself, but they can make for good entertainment (see Knives Out and Ready or Not for example). McDonagh’s film, however, is based on a novel of the same name by Lawrence Osborne which is described as a psychological thriller that’s “brooding” and “compelling.” Unlike the novel, its adaptation isn’t a compelling psychological thriller at all, but an average drama. As we witness the recklessness of a wealthy pair that ruins a weekend, a glimpse of what The Forgiven could have been is only a mirage.

The world is a dreadful place full of dreadful people, as McDonagh shows through his characters. The film follows David (Ralph Fiennes) – a doctor – and Jo (Jessica Chastain) – a children’s book author who hates kids – on their way to the kasbah of their friend Richard (charmingly played by Matt Smith) and his boyfriend Dally (a flamboyant Caleb Landry Jones). But it isn’t smooth sailing as, through their constant bickering and annoyance with each other, David fails to stop his car in time before hitting a young fossil seller named Driss (Omar Ghazaoui) on the road. What was supposed to be a relaxing weekend of drink, turns into a police investigation. The two big mysteries of the film are the victim’s identity and what exactly happened on the road. Jo and David prove to be unreliable, and as the other guests start to gossip, it twists our perception of what we know to have happened so far, making us doubt Jo and David are telling the whole story. Then, a man (Ismael Kanater) comes to collect his son, saying the “English man must pay,” and won’t leave until he does. David is to return with him to bury his son, a customary practice we are told. He leaves with him on a journey to forgiveness – something David isn’t worthy of.

There are many parts of The Forgiven that work very well. Lorne Balfe’s score fits the setting perfectly and gets more anxious and dramatic as the action rises, and we feast our eyes on Willem Smit’s lavish sets and production design in the beauty of Islamic architecture. But, for the most part, it’s a hot cast of names and great gowns, beautiful gowns, and not much else. The gowns and added killer shades are all sported by Chastain who is great as always. The best scenes are the flirtations between her and Christopher Abbott as Tom, an American financial analyst. She has much more chemistry with him than Fiennes, and it leads to enjoyable conversation. Fiennes, on the other hand, plays an unlikeable, alcoholic, “typical bourgeois,” as one character describes. The script has Fiennes spewing homophobic and racist dialogue, making every scene with him almost unbearable. As the film goes on, he is written as showing guilt and emotion over the accident, but luckily, the script doesn’t paint him too sympathetically or give him some kind of redemption. The standout of the cast, however, is Kanater as Driss’s father, who confronts the evil greed of the white man with a menacing stare and anger in his voice.

The Forgiven is so full of intrigue when giving the impression it’s going to turn into an Agatha Christie-esque mystery, but the grand, scandalous revelation that it seems to build towards never surfaces. However, its themes of colonialism, and the exploitation of other countries and their people through power and wealth, can never be understated.