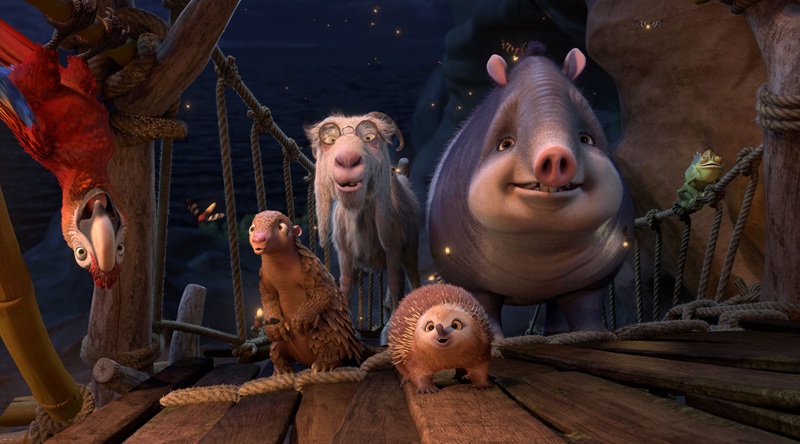 The Wild Life, is based on the story Robinson Crusoe, which was written by Dan Defoe in 1719. Though the original story talks about cannibalism and murder, this film takes a lighter approach for kids.  For this film, its the animals turn to tell their story of what really happened on that island.

The film is told by Tuesday, a parrot who is convinced there is more to the world than the single island him and his friends live on. His friends, who are also animals, do not believe there is anything more than what is on the island until Robinson Crusoe, his dog, and ship wash up along the shore from a wreck. The movie then tells the story of how Crusoe adapts to live on the island in addition to the animals dealing with Crusoe as well.

This film is not along the same caliber as a typical Disney or Pixar movie. There are not many funny parts of the film nor is there a huge story to tell. The animals, for the most part, are entertaining and their voices match the characters of the film very well. There are villains of the film, which present themselves as mangy old cats, yet even their storyline becomes boring as well.

Overall, I did not enjoy this movie, and few laughs happened amongst the audience as well. For parents wondering if their children would focus during this movie, the answer is yes. From the adults perspective, you will be bored from beginning to end. This was an impressive film visually for the independent Belgian company but the story unfortunately falls flat. I would say you should WAIT to see the film when it comes on Netflix or TV.

The Wild Life hits theaters on September 9th. Purchase your tickets in advance at Fandango.

Have you seen The Wild Life? Share your thoughts below!