Skip to content
You are here
Home > Movie Reviews > Rian Johnson Is Coming for the Whodunnit Crown With ‘Glass Onion: A Knives Out Mystery’ 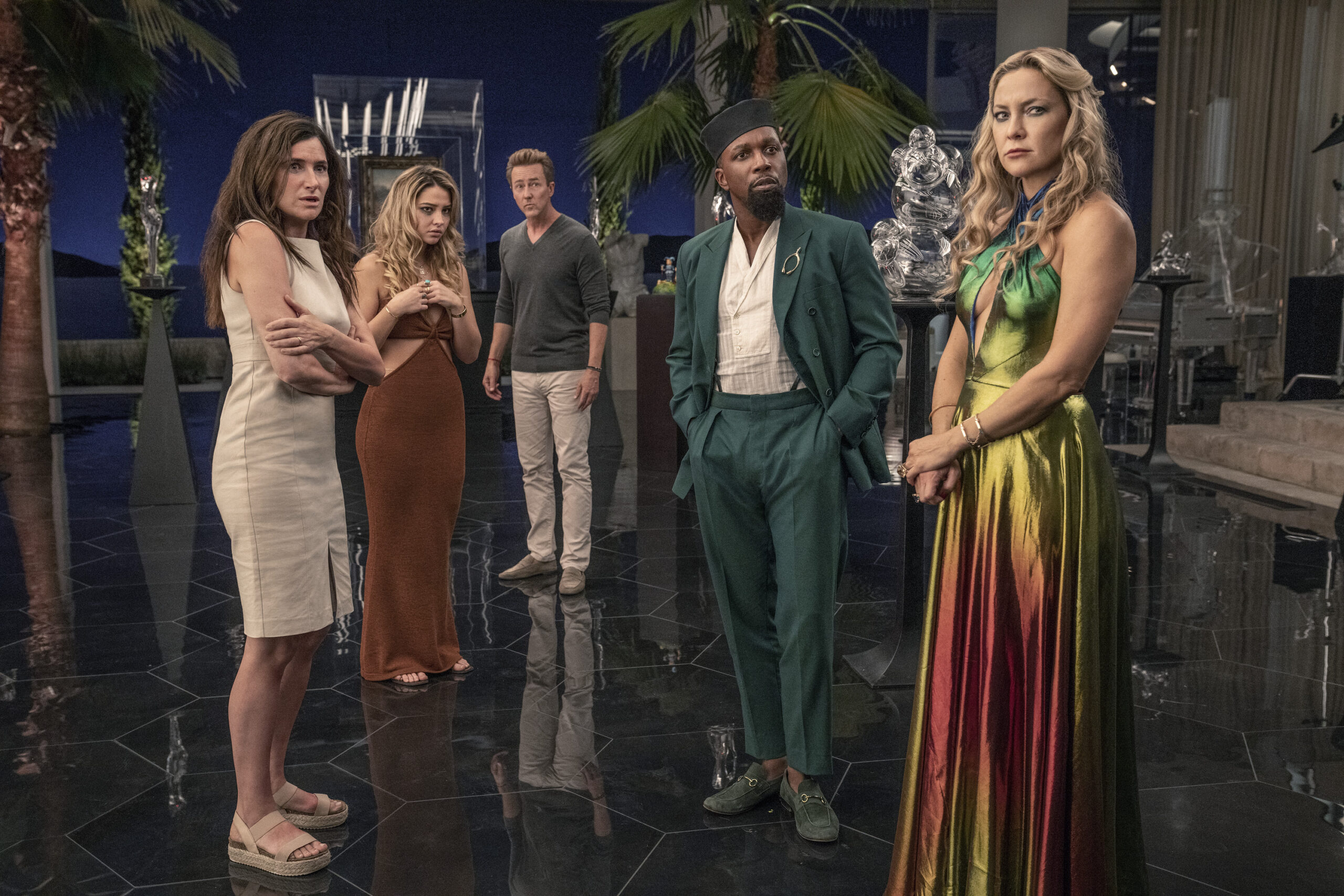 Rian Johnson has done it again. Just like an Agatha Christie novel, Glass Onion feels fresh and even bigger than the previous Knives Out mystery. It scratches that same whodunnit itch as the first, but it also feels entirely different. There is a new mystery, a new location, and new characters, but Johnson also finds new ways to keep the audience on their toes. A film that’s genuinely hilarious from beginning to end, and with a powerhouse ensemble, we need at least five more Knives Out mysteries.

Moving away from the traditional cozy house setting, Glass Onion invites us to a private island in Greece. It’s much more opulent in design than the previous film, with a real glass onion at the top of the island’s mansion. The island belongs to the arrogant, overly-ambitious billionaire, Miles Bron (Edward Norton). As a way to feel a bit of normalcy again in the middle of the COVID pandemic, he invites his old friends for a murder mystery weekend getaway. His friends include the Connecticut governor Claire (Kathryn Hahn), scientist Lionel (Leslie Odom Jr.), former model Birdie (Kate Hudson) and her assistant Peg (Jessica Henwick), influencer Duke (Dave Bautista) and his girlfriend Whiskey (Madelyn Cline), and Miles’ former business partner Andi (Janelle Monáe). Most, like Birdie, aren’t able to contain their excitement, but Andi seems like she would rather be anywhere else. Someone else who seems out of place is detective Benoit Blanc (Daniel Craig), whose invitation to this game is one of the film’s many puzzles. Like Ralph Fiennes’ Chef Slowik to Anya Taylor-Joy’s Margot in The Menu, Blanc’s presence ruins Mile’s party. The detective shouldn’t have been there in the first place, and he makes solving Mile’s murder seem much too easy. But as it turns out, the night won’t just be all fun and games. When someone actually turns up dead, Blanc finds himself back in the middle of a big case. Secrets, lies, and motivations are revealed, giving each character a reason to kill. The great detective has his suspects.

“This rich people shit is weird,” Andi says. That’s what mainly makes the film so hilarious: Each character is ridiculous. They’re all in their little worlds, consumed by their egos, and seeing these unlikable people in the middle of chaos is so satisfying. Their scenes as a group carry a theatrical spirit that never fails to entertain. Johnson has brought together a truly memorable ensemble once again. There’s no weak link among them, but Hudson and Monáe compete for the top stop (especially, best dressed). Hudson contributes the most to the film’s comedy with her “go big or go home” performance as Birdie. She kills it in every scene, especially when the empty-headed aspect of her character jumps out. Monáe’s character is much more layered than the rest, and she serves the finest dramatic performance of the bunch and her best to date. She never lets the mystery behind her character slip through her stoic demeanor. She even gets her own music cue, which warrants much bigger expectations for what her role could mean – and Monáe owns it. Sorry, Daniel Craig, it’s her world, and we’re just living in it. While it can be said that Craig has been upstaged this time around, he’s still as entertaining to watch as ever, accent and all. In his first Knives Out introduction, he’s met confidently sitting in a chair like he owned the place. But now he’s thrown into an environment that makes him and the audience question what he’s even doing there. We get to see him out of his element a bit; standing awkwardly with his hands in his pockets. He’s still ever the snoop, though, and he’s always one step ahead of everyone even when it seems he’s been bested.

It’s been a great year for movies about the rich’s abuse of power and their eventual explosive downfall. It’s also been a great year for murder mysteries because, like See How They Run, Glass Onion is so clever at how it lays out all the answers but we still somehow miss them. Like a real onion, the script is peeled back layer after layer to reveal a whodunnit of great complexity and intelligence, with many surprises at every turn.