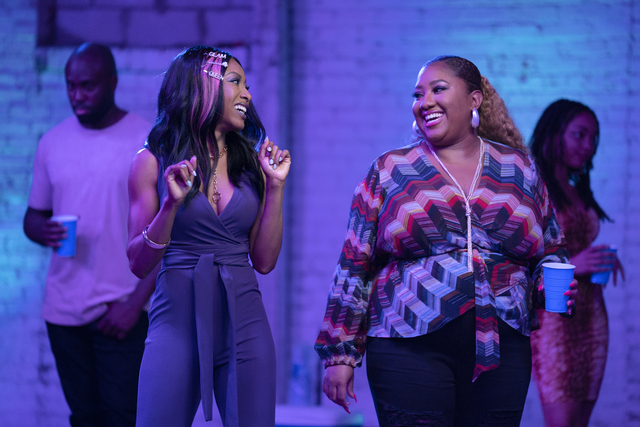 A Black Lady Sketch Show season 1, when it aired in 2019 had peaks and valleys. Unsurprising given how sketch comedy is; some sketches work while others fall short of hitting the mark between truth—however exaggerated—and comedy. Still, the initial season with actresses Robin Thede, Ashley Nicole Black, Gabrielle Dennis, and Quinta Brunson had a banging intro of the quartet as muppets, acting up while Megan Thee Stallion’s “Hot Girl” plays.

They also gave us unforgettable characters such as Dr. Haddassah Olayinka Ali-Youngman warning of the dangers of white people putting raisins in everything to the dysfunctionally comical Chris and Lachel romance and some of these characters do return for season two with a spate of guest stars including Issa Rae, Gabrielle Union, Wunmi Mosaku, and Omarion as well as two new recurring cast members Skye Townsend and Laci Mosley (as Quinta Brunson had scheduling conflicts).

The core story of the group of friends surviving after the world has ended continues throughout the series with various sketches interspersed between this continuing segment. The beauty of this show is how it not only showcases Black women but reminds us of our own experiences hanging out with friends. It does not show a one-dimensional monolithic Black woman experience but joyously revels in the differences.

The show even touches on the challenge of getting a unified opinion with the sketch “Black Market Research”. It gives a shout out to games like MASH many of us played—IYKYK—while still giving relevance to current culture with phrases like “holy Dora Milaje.” There is also a sequel to the beloved first season sketch that highlighted the elation we feel when we encounter solely Black ladies in a professional setting—a rarity for many of us—in “Courtroom Kiki Part 2”.

A Black Lady Sketch Show season 2 improves upon the first season and it’ll be a challenge to select one favorite from this season. Creator Robin Thede is as talented in writing as she is acting and it’s nothing short of phenomenal to have a show specifically made showcasing our comedic talents and stories. It’s now Black women playing a variety of roles and while other sketch shows have existed and had Black people, they are often tokens in the show and feel made for white people to laugh at us.

This show stands out as much as Key & Peele and is more notable due to its creator, writers, and characters being Black women, who are often overlooked. The writers know it, hence the hilarity of the sketch “Tired Dance Moves”. Don’t think there are even white characters in the background; another noteworthy surprise as many shows and films, even when they showcase us will include at least one white person to cater to the white gaze.

Hopefully, this show not only continues but continues to improve upon previous seasons. A Black Lady Sketch Show does more than show Black women’s range for comedy, it celebrates Black women with all their joys and hilariously shows the barriers Black women experience. The second season rises above the previous season and will have viewers’ praying for a third installment.