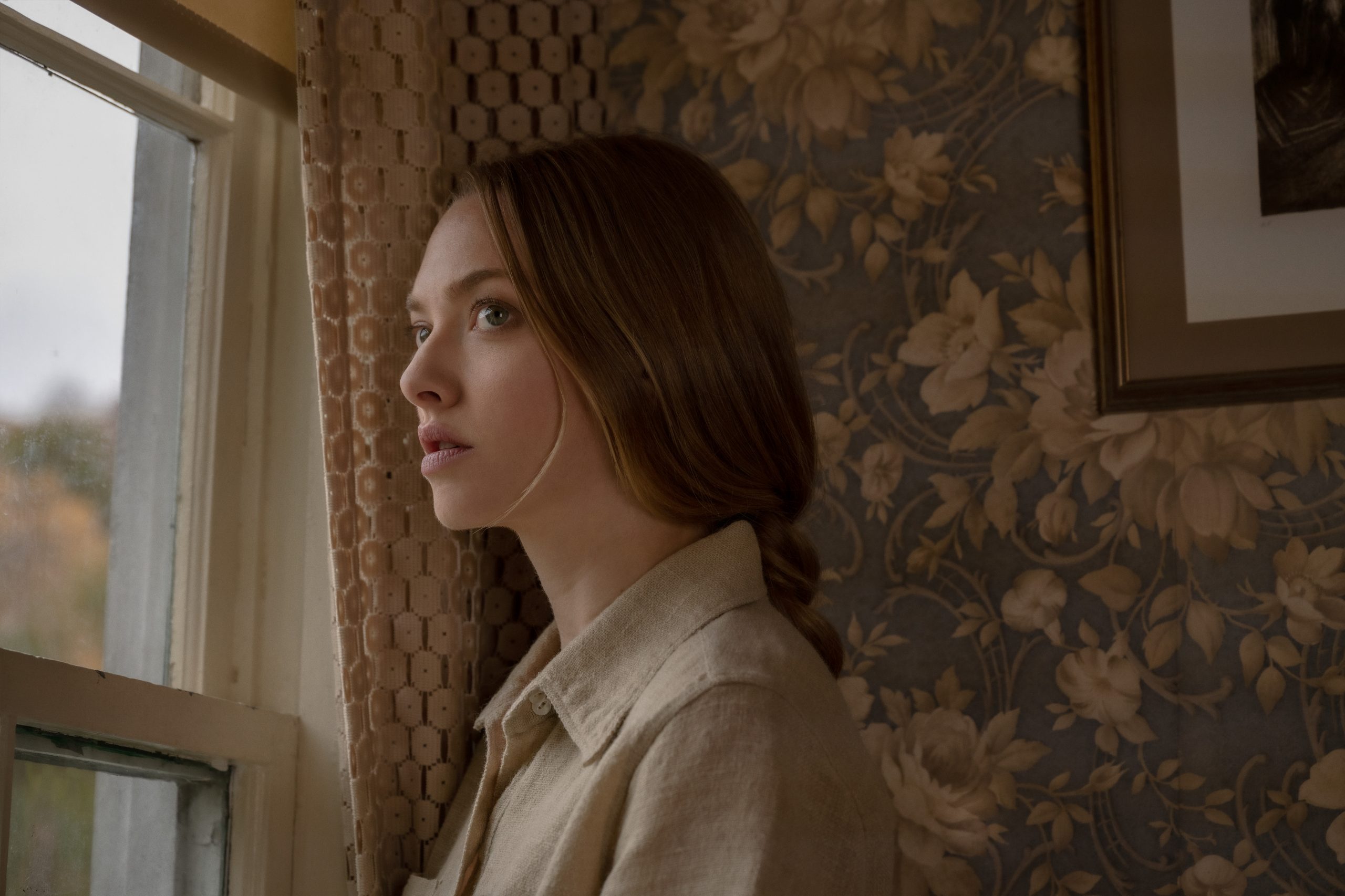 The easiest way to describe Things Heard & Seen is to imagine if Dan Brown wanted to write a ghost story and it got adapted into a film. While based on the novel All Things Cease to Appear by Elizabeth Brundage, it’s not just a simple horror, mystery, drama, or thriller. She, like Brown, fuses that little something extra into its premise with symbolism, Christian themes, art, and historical fact. In its mix of the supernatural with character drama, Brundage’s novel and Shari Springer Berman’s screenplay invoke something akin to Brown’s Inferno. In the latter, the thrills and mystery begin when Robert Langdon finds a projector that displays a version of Italian Renaissance painter Botticelli’s Map of Hell which is based on Dante’s Inferno, the first part of Italian writer Dante Alighieri’s 14th-century epic poem, Divine Comedy. Inferno describes Dante’s journey through hell and states that it is the “realm […] of those who have rejected spiritual values by yielding to bestial appetites or violence, or by perverting their human intellect to fraud or malice against their fellowmen.” Things Head & Seen runs with this phrase in its portrait of a couple surrounded by darkness – both in their environment and within themselves and their marriage. But this film’s Christian-based symbolism comes from the work of American artist George Inness, whose painting, The Valley of the Shadow of Death, appears on a projector mysteriously to the film’s patriarch. Much like Botticelli, Inness’s work was influenced by the spiritualism of another man: Emanuel Swedenborg, whose novel, Heaven and Its Wonders and Hell From Things Heard and Seen, appears and is spoken of many times in Berman and co-director Robert Pulcini’s film. A book that gives a detailed description of the afterlife, specifically how people live after the death of the physical body, is a fitting MacGuffin for a ghost story. Like the adaptations of Brown’s works, however, this one is plagued by the same issue: It’s too smart to fit its big brain on screen, which leads to many unintelligible moments and research left to the viewer afterward.

The film’s first few minutes deliver contrasting tones which illustrate the crumbling of a marriage. Its opening is a bleak one, with a suspenseful score and visual cues signaling something foreboding is to come, but not revealing too much to give it all away. Then, the narrative flashes back to a time of celebration. It’s the spring of 1980, and the Claire family is looking forward to a new chapter in their life. On the surface – well off, educated, good looking, and with a beautiful little girl – Catherine (Amanda Seyfried) and George (James Norton) seem to have it all. Because of George’s dissertation on Inness and the mystic Swedenborg’s influence on his work, he gets the attention of a small college upstate and is offered a teaching position. Catherine has an equally impressive resume as a former art student at the top of her class, who currently works as an art restorer. But like many women of the time, she has to drop everything for him as they leave Manhattan for his work.

They arrive at a decrepit house. Its white siding slowly peeling off to reveal the black shell it covers – but it’s nothing Catherine’s skills with a brush can’t fix. Once they move in, it’s clear from mysterious glances by the townsfolk that their neighbors know something about the property that they don’t. It’s a film full of secrets; secrets both kept from the viewer and the family’s matriarch. However, those secrets can’t be hidden from Catherine for long as she digs deeper and deeper into the history of the house and becomes more attune with the spirits that still linger there. Not only is this a film that paints a picture of a crumbling marriage, but of how ghosts of the past can attach themselves to the living. Their life and violent end echo all around the Claire’s, both helping and torturing them.

The film succeeds in having the level of spookiness necessary in a film like this, even though the ghostly activity on display is something we’ve seen many times over. The paranormal manifestations come in the form of whispers, flickering lights, and full-body apparitions. There’s also a classic seance scene, which pales in comparison to others in TV shows like Penny Dreadful or classic films like The Uninvited, but the intrigue doesn’t cease. There are no jump scares, but there’s a reason for that: It isn’t the spirits that are what’s frightening in this story. It’s what happens to a family under their influence, specifically, what it brings out in George to make him do unspeakable act after unspeakable act. According to Swedenborg, married life continues after death as before, and the violence in the marriage of the deceased begins to seep into the marriage of the living. Can any marriage survive that?

As Catherine, Amanda Seyfried is your familiar gothic novel heroine: a young wife who feels isolated and is often found alone in a haunted environment. Seyfried also has to approach a character who suffers from an eating disorder. It’s something she’s constantly shamed for instead of being met with understanding. It’s an aspect of her character that doesn’t feel necessary, especially since there’s never a proper discussion about it (perhaps because of the period). By making the effort to incorporate something into a character that has a stigma around it, there should at least be an effort made to try to bring some kind of awareness or resolve to it. Seyfried plays a character who is desperately seeking agency but she’s suppressed at every turn and the ending to her story feels wrong, undeserving. While Catherine is open and a believer, James Norton’s George is cynical. He plays one of the most unlikable characters I’ve seen in a long time. Just your typical unsympathetic husband, really, and the focus on him at times takes too much away from Catherine and her character. The cast is full of familiar faces like Natalia Dyer and Rhea Seehorn, and their presence as supporting players creates many of the conflicts that arise. In its two-hour runtime, the writing noticeably struggles at times to adapt a work that in and of itself is built from other works, but the characters, even the secondary ones, are all fleshed out quite well. And the dialogue is very effective at creating some heavy and juicy drama that never lets up. But it isn’t void of some very interesting “choices…” like the questionable relationships and sexual tension that both wife and husband form with other people, and there are also some weird bits of editing and a sequence where Seyfried looks like she’s wearing a GoPro.

Its runtime does start to feel long after a while, but it’s warranted when you’re attempting to make a haunted house movie that wants to do something different. And it certainly does achieve in doing that. But the fear is it will get the same negative response as Brown’s film adaptations because it’s hard to adapt something with that level of research involved. But this isn’t a hurdle that loses the viewer completely because the mystery and level of drama are so consuming and tense. I’m sure that the incorporation of Inness and Swedenborg will pique the interest of many, especially in the script’s discussions and VFX depictions of Hell. It’s a film that makes one reflect on one’s own faith and beliefs as it uses Swedenborg’s teachings to note that there’s no God that decides what happens when a soul leaves its body. We all have light and darkness inside us, but which we let win will decide our fate in the afterlife – and hopefully one that doesn’t go up in flames.